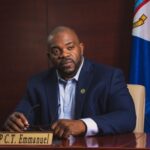 PHILIPSBURG:— Independent Member of Parliament Christophe Emmanuel on Sunday called for an update on the Ombudsman’s inquiry into the awarding of garbage contracts to five companies for the next five years. He said though the Minister of VROMI has gone quiet on the issue, it remains unresolved with several questions unanswered.
The MP explained that at least two companies filed complaints at the Ombudsman who in turn contacted the Minister with several inquiries based on those concerns. This was also confirmed by the Minister. The MP said he understands that the Minister ...