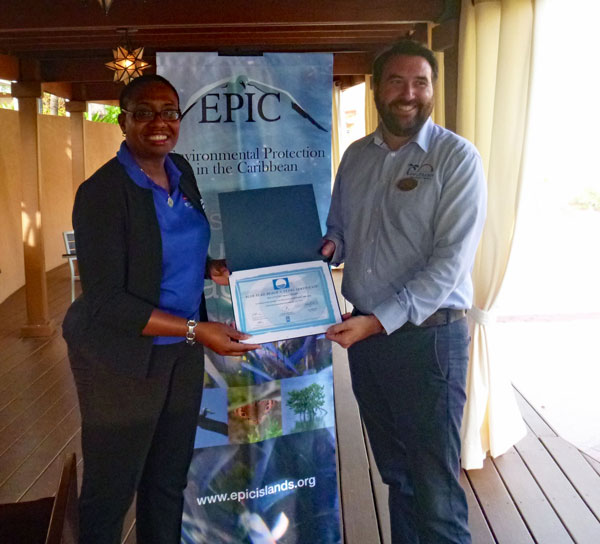 PHILIPSBURG:— At a ceremony on Friday, two sites on St. Maarten were awarded the Blue Flag eco-label for the fifth year in a row. The Blue Flag has bestowed annually on beaches and marinas throughout the world that meets strict environmental and safety criteria. Divi Little Bay Beach Resort and Yacht Club Isle de Sol were commended for their standards of excellence and voluntary efforts towards environmental sustainability.
Environmental Protection in the Caribbean (EPIC), which organized the event, is the National Operator for the Blue Flag Program on St. Maarten and responsible for conducting site audits each year and assembling a local jury to review applications. The program is run internationally by the Foundation for Environmental Education (FEE) and includes over 4,000 beaches and marinas in 49 countries worldwide.
EPIC President Natalia Collier welcomed attendees, observing “The commitment of honorees Yacht Club Isle de Sol and Divi Little Bay Beach Resort cannot be overstated. They have overcome local challenges, such as recycling, in meeting the criteria, serving as leaders in sustainable tourism and best practices.”
EPIC acknowledged the many partners who have made the Blue Flag program a success, including the Tourist Bureau and the St. Maarten Hospitality and Trade Association (SHTA). In addition, the American University of the Caribbean assists the program by voluntarily testing water quality at current and potential Blue Flag beaches twice every month. The contributions of EPIC staff such as previous Love the Lagoon Project Manager Rueben Thompson, who established the Blue Flag program, and many interns were also recognized.
Ms. Collier described the continued growth of the Blue Flag program, noting “This past year a new program was introduced: the Blue Flag for Sustainable Boat Tourism Operators. EPIC sees this is a great opportunity given the popularity of boat-based tourism and looks forward to establishing the Blue Flag for Boats on St. Maarten as well as increasing the number of awarded marinas and beaches.”
Ms. Lorraine Talmi, President of the St. Maarten Hospitality and Trade Association (SHTA), provided opening remarks about the value of EPIC’s sustainable tourism efforts for protecting the resources which make St. Maarten such a popular destination as well as diversifying the economy.
Ms. Lisa Noel of the Tourist Bureau congratulated the recipients on their hard work while awarding the Blue Flags for the coming year.
EPIC strives for the continued growth of the Blue Flag award for St. Maarten and hopes to see it become a larger part of the vital tourism economy. EPIC also operates the Green Key eco-label award for hotels and restaurants. Managers of sites interested in the Blue Flag or Green Key award may contact Natalia Collier at This email address is being protected from spambots. You need JavaScript enabled to view it.
document.getElementById(‘cloaka00ca772350bb27be7ae86f8d7220a74’).innerHTML = ”;
var prefix = ‘ma’ + ‘il’ + ‘to’;
var path = ‘hr’ + ‘ef’ + ‘=’;
var addya00ca772350bb27be7ae86f8d7220a74 = ‘ncollier’ + ‘@’;
addya00ca772350bb27be7ae86f8d7220a74 = addya00ca772350bb27be7ae86f8d7220a74 + ‘epicislands’ + ‘.’ + ‘org’;
var addy_texta00ca772350bb27be7ae86f8d7220a74 = ‘ncollier’ + ‘@’ + ‘epicislands’ + ‘.’ + ‘org’;document.getElementById(‘cloaka00ca772350bb27be7ae86f8d7220a74’).innerHTML += ‘‘+addy_texta00ca772350bb27be7ae86f8d7220a74+’‘;
or 545-3009.