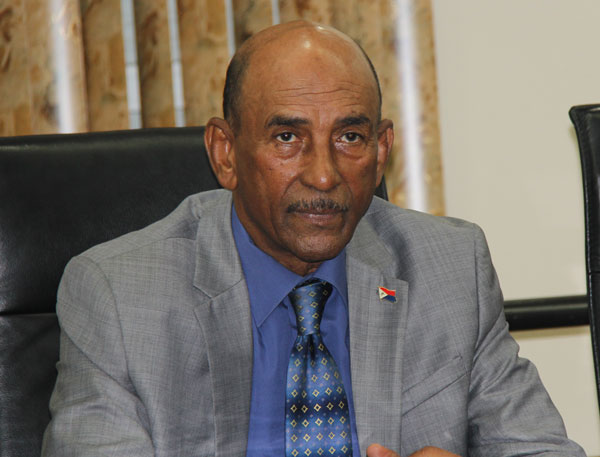 Dutch Government did not live up to its promise to send Curacao Minister of Finance a letter on the Division of Assets.

PHILIPSBURG:— Minister of Finance Richard Gibson is planning to travel to Curacao as early as Wednesday to meet with the Minister of Finance there to further discuss the division of assets and the amounts of monies owed to St. Maarten. Gibson told reporters last week that the Dutch Government had promised to send a letter to Curacao Finance Minister but to date, they have not done so even though he has been in touch with them to remind them of the promises made to St. Maarten. Minister Gibson said he is not sitting back and wait on the Dutch government to send the letter but instead he has made arrangements to travel to Curacao as early as Wednesday to meet with Curacao Finance Minister to further discuss the matter. The Minster also reminded reporters that the monies owed to St. Maarten is due by December 31st, 2016 but he is doing his very best to get Curacao to turn over St. Maarten’s share since he wants to keep the 2016 budget balance. He said so far the budget of 2016 is in line and that government actually spent fewer monies this year.
Finance Ministry doing its best to present a balanced budget for 2017 on time.
The Minister of Finance also said that his Ministry is aiming at presenting a balanced budget for 2017 on time for the very first time. He said that he is hoping to keep the budget at the same amount as 2016. He said that his staff is scrambling at the moment to get all the elements that have to appear in the budget that meets the requirement of the law.
The Minister said it has been a struggle for his Ministry and staff because of the global economic gloom. He said things are not what they had expected to be. Gibson said in the USA they were expecting an economic growth of 3 ½ percent which was reduced to 2 ½ percent by the experts and now the US GDP growth is at 1%. This new information he said will affect St. Maarten because people would have to adjust their spending including travel.
The Minister said that these are things St. Maarten cannot control but this will transcend into people having disposable income and they will have to curtail their travel plans. This he said this will bring the economy under pressure. However, he said that St. Maarten will do what has to be done to produce a balanced budget on time for 2016. The Minister also made clear that based on the plans and agreements to construct the new hospital, the buildings and land belonging to SMMC will have to be sold and he expects SMMC to pay the government the back taxes that they owed. Gibson said that there were measures put in place, such as the indexation of the casino fees.

One of the things the Minister is hoping to protect is to the finances for social institutions and those institutions will not have to deal with any budget cuts.