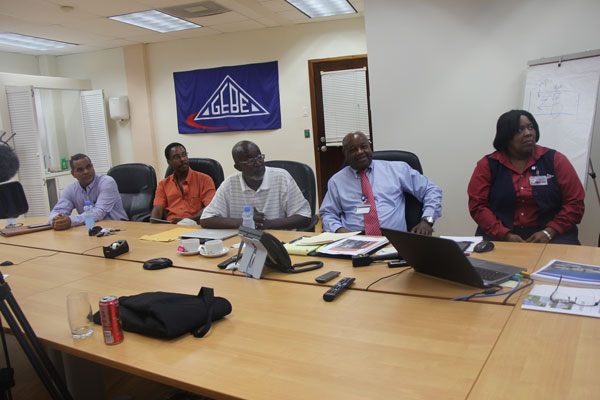 Residents asked to file claim for damaged equipment within 48 hours.

PHILIPSBURG: — GEBE production manager Kenrick Chittick made a power-point presentation for members of the media to explain the reasons there are so much load-shedding these past two weeks.
Chittick said that the outages is caused mainly because decisions that had to be taken by the management of the company which was not made in a timely manner is the main cause of the outages. Chittick said that if engine 20 was purchased in a timely manner St. Maarten would not have been in this position. The attributed the change of government, management of GEBE caused the delay because engine 20 had to be purchased earlier and that did not happen. “There were critical decisions that had to be taken by management from 2012 to 2015 which did not happen.”
He said the engine (20) was purchased and that engine will arrive on the island by October and will be operational by December 2016.
Chittick further stated that there are six engines that are currently down all of which are old and outlived their lives. He said those engines have to be repaired, but that is also a challenge for the company because they cannot even find the parts to repair those engines.
He said the fire at the power-plant damaged engine 7 and they ordered the parts to repair that engine. He also said that engine 12 failed and that too they had to repair.
Chittick said they have another older engine at the plant that is working condition but they are using it as a back-up when there is load-shedding.
He said one of things the people has to know is that the demand for electricity has grown over the years and GEBE has to produce 55 megawatt of electricity to maintain the island.
He said whenever there are engine failures, they areas that will see load-shedding those are St. Peters, Saunders, and Middle Region because those areas are not commercial areas. Recently he said that even Philipsburg had to endure power outages, because another engine failed where a piston ring had broken and had to be repaired.
Chittick also unveiled some of the plans the company has for the future, one of which is to purchase land for expansion.
Chairman of the Supervisory Board Roy Marlin tried to the press conference only about the power outages and did not want to address the issues of appointing members to the operational board of GEBE. Marlin said the Supervisory board is only in office for a month and they will not appoint people that are not able to function optimally. He did say that they are following the procedures in order to appoint the right persons to certain positions such as CEO, COO and CFO. He said publication within the company for the positions that are available and if persons within the company did not apply then they would have to look externally.
Asked if timely maintenance is done in a timely manner to avoid the engine failure, Chittick said that the engines are being maintained. He said some of the parts are internal and they cannot see the condition of the parts. He also acknowledge that they know the lifetime of the engines and in some cases the engines failed even though they did not outlived its lifespan. He said that the engine that broke down last week, was overhauled in 2015. He said at this moment all engines (8 of them are running) and the entire island has electricity however, they cannot guarantee when one of the engines will go down.
Asked about communications and the company remains silent when there are severe load-shedding. Marlin said when engines failed then their priority is to get the engines fixed and not have the production manager leave his post to write press releases. Asked by SMN News if GEBE does not have a communication person in place that can properly inform the community, the board said that not even such persons would be able to do that because they would need to get information from the production manager. He did agree that they have to work on communicating more with the people. He said GEBE facebook page is always updated with the load-shedding schedule and there are plans in place to upgrade the company website.
As for persons whose equipment were damaged due to the load-shedding they must file a claim with GEBE within 48 hours in order for the company to study their claim and to reimburse them.
The forms that has to be filled out for claims can be obtained at GEBE main office and can also be found at GEBE’s website. Persons are asked to send all queries and complaints to GEBE customer service and not the secretary.

Source: St. Martin News Network
GEBE Production Manager says change of government and management of GEBE is the cause of the power outages and load shedding.