Employee stands chance of being rehired by new board when they are installed.

PHILIPSBURG:—The internal auditor of GEBE Sharine Daniel will receive a letter before Saturday June 14th 2016 from the Temporary Manager Andrew Zagers informing her that her contract with GEBE will end on June 14th 2016 and that the company does not intend to renew her contract as an internal auditor, this was based on instructions given to the Temporary Manager by the Audit Committee.
SMN News learnt from well-placed sources that the law firm representing GEBE will be drafting the letter for Zagers. With the one month notice Daniel has to turn over all keys and other properties she has for the company and seek employment elsewhere.
While Daniel is the key employee of the company that wrote several reports against the former CEO and CFO that were misusing the companies monies and credit card, she has now become a target for certain members of the operational and supervisory board, and especially the Audit Committee. SMN News understands that the audit committee wanted to close the department down in order to get rid of Daniel simply because Daniel filed complaints against two members of the committee and they now believe that it’s their time to get back at her. However, the Chairman of the Board Rene Richardson disagreed with the decision of the committee citing that Daniel is a hard worker, one that is an asset to the company and furthermore she is a qualified local that is simply doing her job. Most of all Richardson informed the Audit Committee that he is not in agreement with them because Daniel saved the government owned company thousands of dollars when they ended the contract with BDO the external auditor that was working for the government owned company as well as she was the employee that conducted investigations against the former CEO Maduro and CFO Gartner.
Despite the fact that the current members of the supervisory board and temporary manager intends to end Daniels services to the government owned company, she still stand a chance of being rehired by the new board who will be appointed on May 26th 2016.
Daniel has had her run-ins with at least two members of the supervisory board where she went as far as filing a criminal complaint against one of them but so far nothing came out of the complaint Daniel filed with KPSM. A second board member it is alleged sexually harassed her by touching her breast while on the job. It is understood that Daniel filed a complaint against Ed Gumbs with the Supervisory Board, the human resource manager and even the former CEO but to date no sanctions have been taken against Gumbs.
A well-placed source said that Gumbs is busy micro managing the company and that he is at the GEBE every day trying to run the day to day operations of the company. SMN News learnt that the chairman of the board confronted Gumbs on several occasions and informed him that he has no right being at GEBE every day since he is not working for the company and his actions are totally illegal, despite those conversations it is understood that Gumbs refused to stop intruding on the company’s operations and still goes there on a daily basis.

Source: St. Martin News Network
GEBE Temporary Manager intends to inform Internal Auditor that her contract will not be renewed 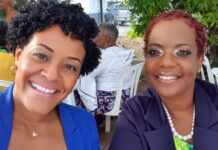