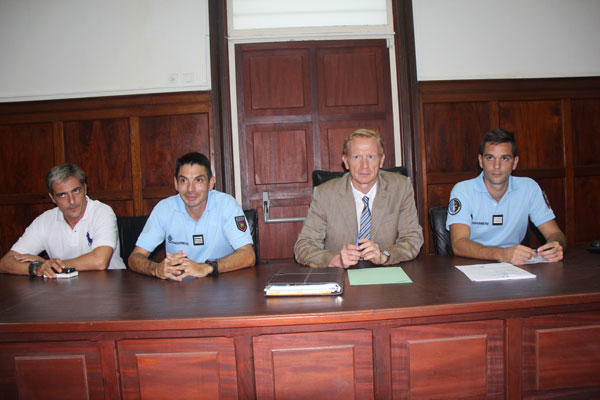 Two arrested and transferred to Pointe a Pitre.

Marigot:— Vice Prosecutor Yves Pillard, Commandant of the Gendarmerie Sebastien Monzoni, Emmanuel Maignan and the deputy director of the Brigade de Research Martin Gregory called on the residents especially the eyewitnesses that witnessed the double homicide early Sunday morning to visit the Gendarmerie in La Savanne to provide information that would lead them to the other suspects that were involved in the murder of Shawn and Bernardo and the attempted murder of two other persons that were at the scene.
Vice Prosecutor Yves Pillard said that the all the suspects and the victims are between the ages of 24 to 26 years of age. He said the suspect now victim “Bernardo” had a firearm with him when Shawn walked into a night club and met his live-in partner dancing, Pillard said that Bernardo used the firearm and fired one shot in the head area of Shawn who died subsequently. Pillard said that Bernardo then tried to fire two other shots one at his live-in partner and one at another young man but the firearm jammed.
The vice prosecutor said that the firearm was recovered because eyewitnesses at the scene restrained the suspect who became very much outraged and they began beating him, that he suffered a gruesome death.
Further to that, the gendarmes arrested two suspects both in the Grand Case area, one around 5am and the other at about 11 am. The two suspects he said were transferred to Pointe Pitre. Pillard also made ?clear that the investigation is now handled by Pointe Pitre Guadeloupe.
Sebastien Monzoni, commandant of the Gendarmerie and captain Emmanuel Maignan said that this case is handled the same way they investigated the “Wendy” case. Some 30 gendarmes on the streets of St. Martin gathering evidence.
As for the woman who is also about 25 years old, she is the mother of four children who was living with one of the victims identified as Shawn and her four children.