MARIGOT:— The gendarmes seized a total of ten cars on Thursday and Friday for further investigation. Some of the seized vehicles are either suspected stolen vehicles while others have been using documents and number plates meant for other vehicles.
Commandant of the Gendarmerie Sebastien Monzoni said the operation started Thursday in Concordia where three garages were controlled and five vehicles seized for further investigation.
The all-day operation continued on Friday in French Quarter where three other garages were also controlled. Monzoni said that in French Quarter they arrested one man who attacked a gendarme with an iron bar while they also seized five vehicles for further investigation. He said the seized vehicles are suspected stolen vehicle or vehicles that does not have proper documentation.
Besides those vehicles the gendarmes seized seven car wrecks that were sent to be destroyed.
The head of the Gendarmerie stressed that the operation is not over as they intend to continue in order to get the owners of these garages to have the proper documentation in place to operate a business and to properly declare their income.

August 4, 2021
0
WILLEMSTAD:— Prosecutor’s office is obliged to pay a Curacaolean man who purchased a yacht in an auction for about $160.000 for damages plus the amount paid for the yacht.It pertains to the yacht that was confiscated by orders of...
Read more 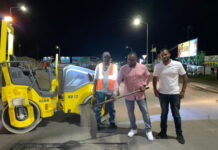 August 4, 2021
0
~Ottley promised a hands-on approach when dealing with unnatural deaths at MHF~ PHILIPSBURG:— Minister of Health and Labor (VSA) Omar Ottley said in response to...