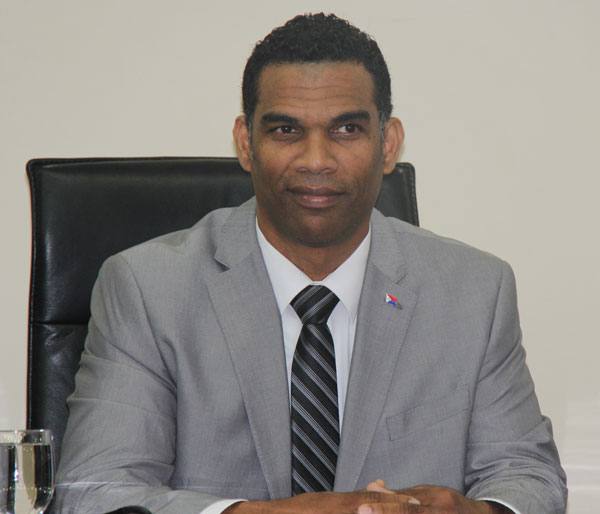 PHILIPSBURG:— Minister of VROMI Angel Meyers who just returned from the United States told members of the media that the delegation he travelled with which was headed by Prime Minister William Marlin visited a waste to energy plant in New York in order have such a facility constructed on St. Maarten. Minister Meyers said the government of St. Maarten is currently working on a Memorandum of Understanding with the New York company that has 44 waste to energy plant, all of which they financed, constructed and manages.
The Minister made clear that even if an agreement is signed now, it will take at least three years before the plant is completed and fully functional. Minister Meyers said the owners of the company visited St. Maarten several times as they are very much interested in working with St. Maarten.
Meyers said the delegation also visited another plant at West Palm Beach Florida, which he said looks more like a five star hotel. At that plant he said one of the things that caught his attention is the price they are selling their electricity. Meyers said the company is selling electricity for 2cents per kilowatt while some years ago GEBE had an offer of 32 per kilowatt.
As for the landfill the Minister said the lifespan of that landfill expired since 2008 and Government is working on a solution simply because they cannot continue to build a mountain on Pond Island. For now he said that he strongly believes that some sort of recycling has to start even though a plant is not readily available. “For now the garbage can be wrapped and stored away until the plant is built and becomes operational.
Meyers said that if St. Maarten starts to recycle its garbage it will take away at least 30% percent of garbage that has to end up on the landfill.

Outdated Terms of Reference.
Asked by SMN News how old is the terms of reference that was given to the contractor that is currently managing the landfill. The Minister said he do not know how old is the terms of reference but is almost sure that it’s a copy of the same terms of reference that was given to the previous contractor.
When asked for a comment on the statements made by Minister of Health and Labor Emil Lee and the Chairlady of Parliament regarding the Terms of Reference for the landfill management, the Minister did not mingle with words when he said that he is fully aware that this is an election year and he expected critics’, but those criticizing his Ministry and its work does not distract him. “I am more focused on people that comes with solutions to the problems facing this country, not those that criticizes.”

St. Maarten Delegation Attended Summit in Washington.
The Minister also gave some information on the summit the delegation attended in Washington that aims at creating a better framework for renewable energy. Meyers said several countries attended the summit and most countries in the Caribbean are dealing with the same problems St. Maarten is facing with is GDP. He said because these countries have to import heavy fuel it places a burden on their budget and economy. The idea he said is to work with Latin American countries to develop a better framework. One example the Minister gave was Aruba who is saving 20% on renewable energy. The Minister said that representatives from the Caribbean Development Bank and the World Bank also attended the summit and they are ready to provide financing for renewable energy since the Caribbean countries has all that it takes for such a project.