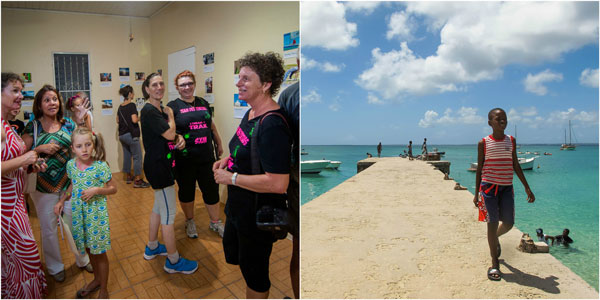 Grand Case:— Over 300 people of all ages came out to Amuseum Naturalis on Friday to celebrate island heritage and enjoy an evening of music, food, drinks, and photography at the grand opening for the 2016 Heritage Photo Exhibition. The annual Heritage Photo Contest and Exhibition was developed by Les Fruits de Mer as a way to showcase local heritage and photographers, and as an opportunity to create a public dialogue about the unique heritage of the island.

Attendees thronged the museum’s Special Exhibition Room to see the 32 works chosen for display from the 140 submissions for this year’s theme, The Spirit of St. Martin. Additional images were spotlighted in The Spirit of St. Martin slideshow playing in the museum’s theater. Guests also voted for their choice to win the Erika Cannegieter-Smith People’s Choice Award, an annual prize which honors the founder of Be the Change SXM. The winner of the 2016 People’s Choice Award was Francisco López, with a vivid image of children on the pier in Grand Case Bay.

“It was a fantastic night, and it was especially great to see people sharing memories and talking about what heritage means to them, and what’s special about this island’s heritage,” said Mark Yokoyama, co-founder of Les Fruits de Mer and co-curator of Amuseum Naturalis. “This kind of discussion and sharing is exactly what we hope this event will inspire.”

For anyone who missed the opening, the free exhibition will be on view from 4-8pm on Thursday June 30th, the last publicly open day planned for the pop-up Caribbean natural history museum Amuseum Naturalis. Amuseum Naturalis is located at 96 Boulevard de Grand Case in Grand Case. The contest gallery can also be viewed online at http://www.lesfruitsdemer.com/category/spirit-of-st-martin/.