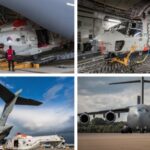 WILLEMSTAD:— HNLMS Groningen will have access to an NH90 maritime combat helicopter again after 2.5 months. This morning a plane took off by air to the Caribbean. The helicopter replaces the one that crashed in July.

The NH90 has been prepared for air transport at Eindhoven Air Base in recent days. The aircraft was already loaded into a C-17 transport aircraft yesterday. That aircraft is 1 of the 3 aircraft of the joint NATO Heavy Airlift Wing program.

It is not uncommon for Defense to fly in helicopters by air transport. Normally, the aircraft sails on the patrol vessel ...