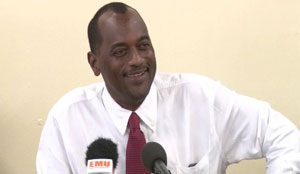 BASSETERRE:— Fifteen months after taking office, the Team Unity Government continues its political victimisation and denying scores of persons the right to work in the country of their birth.

But for the President of the Clarence Fitzroy Bryant College (CFBC) Dr. Kelvin Daley it must be a traumatic experience, having been sacked by the Concerned Citizens Movement (CCM) of Premier Vance Amory when it took office three years ago in Nevis. Daley was hired by the Federal Government of then Prime Minister the Right Hon. Dr Denzil L Douglas as President of the CFBC and was this week sacked by the Team Unity Government of Prime Minister Dr the Hon. Timothy Harris.

Opposition Sen. Hon Nigel Carty on Wednesday condemned the latest human rights abuses by the Timothy Harris government pointing out that that there was no evaluation of Daley’s work and no conversation between him and the Chairman of the Board.

He was critical of the statement by Minister of Education, Hon Shawn Richards that the CFBC President has not been fired.

“It is a joke. It is disingenuous and disrespectful and dish inset because other signs indicate that what has happened is that Dr Daley has been dismissed. He has a contract, but instead of allowing the contract to come to an end and instead of dealing with him on the terms of his contract, he has been pushed out,” said Carty, who continued:

“She has been sent home. She has been thrown out to give a constituent of Richards who is not nearly as qualified and sufficiently qualified for the position. Ms Morris is a highly qualified person and well trained with a first and Master’s degrees,” said Carty, who added that the replacement though has had some training does not possess a degree,” said Carty, who also accused the Minister of changing the lock to the office and the name of Mrs. Morris as a signatory to the Unit’s bank account under the control of the Coordinator/Director.