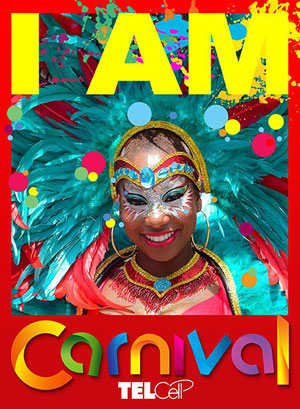 Pond Island:— TelEm Group announced today that it will be adopting the theme “I Am Carnival” as a major carnival promotional campaign during Carnival 2016″

The theme has been specially chosen to appeal for everyone in the community who enjoys taking part in the island’s premier touristic and cultural event, encouraging them to make a special effort to make this year’s Carnival their own – in any way they can.

I Am Carnival will feature colourful and nostalgic banners featuring local cultural icons, Fred York (representing musicians who play during carnival); Anna Rabess-Richardson (representing the beauty pageants as Ms. Mature Queen) Fish Da Mega Boss (flying the flag for Kaisonians) and Pa Ben as the charismatic MC/Host of many, many carnivals of the past.

“We have come up with the concept of “I Am Carnival” to make everyone feel involved in Carnival,” said promotion coordinator, Grisha Marten.

She recognizes that every contributes in their own way to make Carnival what it is, and believes this should be prominently shown, because without this kind of cooperation, “there would be no Carnival,” said Grisha.

She said Carnival fans can look out for posters and banners featuring our local Carnival icons throughout the Carnival season, at the Festival Village and adorning lamp poles throughout Philipsburg.

“Whether it’s parade spectators, patrons, Kaisonians, Revelers, visitors or just individuals who want to have fun during Carnival, we want them all involved and recognized – and we aim to really bring some pride and fun back into Carnival,” continued Grisha.

She says the “I Am Carnival” theme is being carried in all company carnival promotions and will be highlighted in TelEm Group’s “Red” section part of the massive Gordon Yee Carnival Troupe this year.

“We have t-shirts, we have promotional material, we have specials and contests and all the shows we sponsor will play on the theme,” continued Grisha.

She said, of course the slogan will embrace the company’s traditional red colour, which again will be ablaze at the Festival Village throughout the Carnival season.