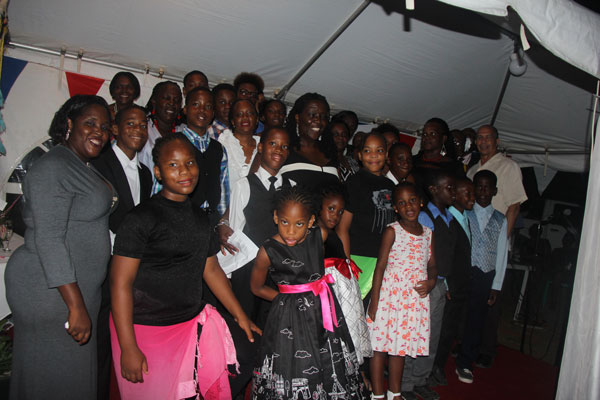 DUTCH QUARTER:— Some 27 persons and or businesses were honored Saturday night for their years of contribution to the I Can Foundation who celebrated their 20th anniversary.
Among those that attended evening celebration are Acting Governor Reynold Groenveldt, Chairlady of Parliament Sarah Wescot Williams, MP Cornelius de Weever, MP Rodolph Samuel, Ombudsman Nilda Arduin Lynch and several persons from the business community.
Cassandra Debby Gibbs told her guests that her vision which came through her mediation was put into action some 20 years ago. She said while everyone taught it was when hurrican Luis hit the island in 1995, he love for children started way back. Gibbs said as bus driver, teacher and nurse she has the love for children at the center of her heart and if she is asked to do this over she will do the very same thing all over again.
Gibbs also thanked her staff, two of whom she honored, while her staff surprised her with a certificate of appreciation for the ‘pay less” job she is doing. The workers told the gathering that while Debby would pay her workers at the end of every month she herself does not have a salary.
Speakers of the night was Acting Governor Groenveldt, and MP Wescot Williams while those that were honored also shared their stories and the reasons they chose to support I Can Foundation.
The most moving speech was given from the first child that Debby opened her doors to at the age of 14. The young woman said even though she is from St. Maarten she was residing in Curacao and at age 14 she returned to St. Maarten with her brother who quickly got somewhere to stay while she remained homeless. She said when Debby heard of her, she immediately opened her doors to her, find a school for her and also taught her to speak the English language. The young mother who is now in her 30’s said that she went abroad to study and is back on the island working as fire fighter, her message to the children at the I Can foster home is to never give up and to always follow their dreams.