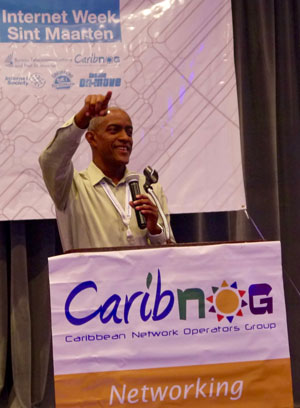 PHILIPSBURG:— A global Internet giant is partnering with a Caribbean-based group to advance regional technology development.

The Internet Corporation for Assigned Names and Numbers (ICANN) is joining forces with the Caribbean Network Operators Group (CaribNOG) to build the capacity of the region’s technical community.

ICANN coordinates the Internet’s system of unique addresses. The global nonprofit organization is dedicated to ensuring an open, stable and secure Internet.

“When we started working to develop capacity in the region, we soon realized that CaribNOG had the same goals, and so we quickly decided that by working together, we could accomplish more,” said Albert Daniels, Senior Manager of Stakeholder Engagement for the Caribbean at ICANN.

Daniels was speaking at the joint opening of ICANN’s LAC-I-Roadshow and CaribNOG’s twelfth regional meeting, held at Sonesta Great Bay Resort, Philipsburg from October 24 to 26.

The spirit of collaboration goes far beyond ICANN and CaribNOG. It includes several other major players in the global Internet landscape, such as the Latin American and Caribbean Internet Addresses Registry (LACNIC) and the American Registry of Internet Numbers (ARIN). LACNIC and ARIN are the two regional Internet registries that share responsibility for the Caribbean sub-region.

The U.S. government helped create ICANN in 1998 with the goal of building a stable, multi-stakeholder organization that could take over the management of the Internet’s naming and number system. To accomplish this goal, the U.S. Commerce Department’s National Telecommunications and Information Administration partnered with ICANN to transition important coordination functions, known as the Internet Assigned Numbers Authority (IANA) functions, to the private sector. On October 1, the IANA stewardship function was formally transitioned to the global multi-stakeholder community.

At LAC-I-Roadshow, Daniels presented on technical issues like cyber security, and policy issues such as the IANA stewardship transition. The slate of international experts conducted hands-on sessions covering a broad range of topics, including Internet exchange points.

The LAC-I-Roadshow and CaribNOG 12 are part of Internet Week Sint Maarten, a five-day conference focused on developing the Caribbean Internet.

The three-day gathering was supported by the Caribbean Telecommunications Union; the American Registry for Internet Numbers; Packet Clearing House; ArkiTechs and The BrightPath Foundation.

The weeklong conference is coordinated by the St Maarten telecommunications regulator, BTP. It is open to the public and free of charge, with a live video stream for remote participants.