Home Local News If asked to serve my country as Governor I will not refuse... 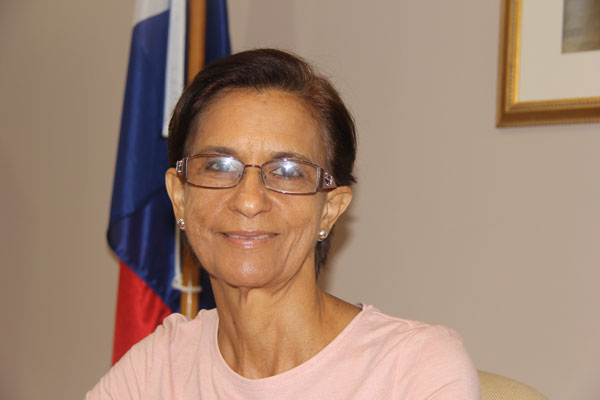 My focus now is on the upcoming elections.

PHILIPSBURG:— Chairlady of Parliament and Leader of the Democratic Party Sarah Wescot Williams reiterated on Monday during a press conference that she is focusing on the September 26th parliamentary elections as leader of the Democratic Party. She said when SMN News published the article that she asked to be the nominee for the Governor’s post, she immediately responded to the article in a lengthy press release. However, her focus today and the days ahead is to focus on the upcoming Parliamentary elections. Wescot Williams went on to say that the appointment of Governors is the sole responsibility of the Kingdom which done by Kingdom decree.
Asked by SMN News who nominated the current sitting governor, Wescot Williams said at the time she was not in office, however, she admitted that St. Maarten did play a certain role.
SMN News reporter then asked the leader of the Democratic Party Sarah Wescot Williams if there was a discussion as to whom should be the nominee when she announced that she should be considered for the post. The leader of the Democratic Party and Chairlady of Parliament referred to her press release in which she said she explained exactly what transpired, she did say she will not be releasing the names of potential candidates. SMN News reporter then asked Wescot Williams if she is asked to serve her country in the capacity as Governor knowing she held all the known positions in the country such as Prime Minister, Chairlady of Parliament, Minister and prior to 2010 commissioner. Wescot Williams said that if she is ever asked to serve her country in the capacity of governor she will not turn down or refuse to serve her country at any level.

St. Maarten wishes the people of France much strength.
The Chairlady of Parliament also expressed sincere condolences to the people of France especially the families and friends of those that perished in the July 14th attack in Nice. She said that the people of St. Maarten are praying for the families and friends of the victims and hopes that they gain strength during this time.
Electoral Reform and Integrity Law.
Wescot Williams told reporters that St. Maarten is back to the drawing board when it comes to electoral reform she explained the difficulty the country is facing in getting this done as the Kingdom already gave their opinion on the changes St. Maarten wants to make in the country’s constitution.
As for the Integrity Law that was quashed by the Constitutional Court Wescot Williams said that St. Maarten is working on a new draft law which would fit within the confines of the country. Apart from that she said that she intends to broaden the scope of the Constitutional Court which would give every citizen the right to take their cases through a lawyer, to the Ombudsman who would then have to take their cases to the constitutional court.
Wescot Williams said she also wants to have that court deal with the disputes since there the dispute committee has not been established and St. Maarten has had a number of disputes to deal with since becoming a country within the Kingdom.

Source: St. Martin News Network
If asked to serve my country as Governor I will not refuse —- MP Wescot Williams.