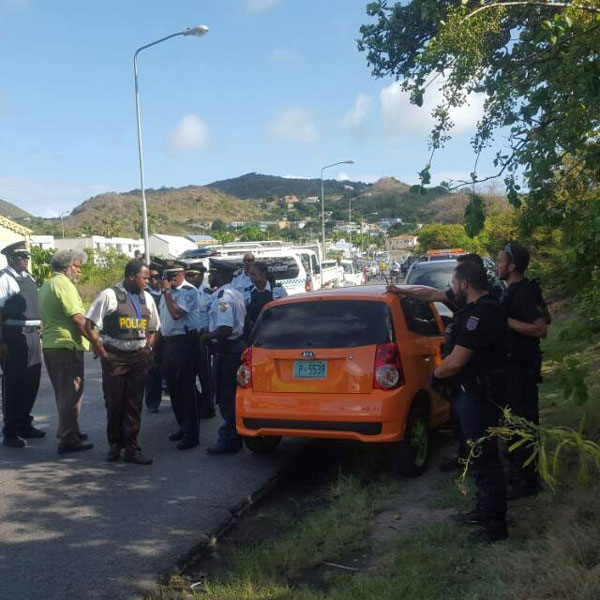 PHILIPSBURG:— On Thursday July 14th shortly after 03.00 p.m. while the Multi Disciplinary Team was conducting controls at Border Point in Belvedere they noticed that a small orange colored vehicle had just crossed the border at high speed from the French Quarter into the Belvedere area and that this vehicle was being chased by a patrol of the Gendarmes.
The driver of the fleeing vehicle stopped his vehicle close to where the police controls were taken place. The Gendarmes in question continued their pursuit and also crossed the border into the Belvedere area and approached this vehicle which they were chasing.
Several armed Gendarmes stepped out of their vehicle attempted to arrest the driver by removing him from the vehicle by force. The Multi Disciplinary Team immediately intervened in the matter by informing the Gendarmes that they were out of their jurisdiction and if they needed any assistance they should contact the police. They were instructed to immediately refrain from any further actions or conducting any further investigation, which they did. In the meantime several other vehicles from the Gendarmes with reinforcement arrived on the scene. This spectacle attracted a lot of attention from drivers passing by and people living in the neighborhood.
The Gendarmes then informed the Multi Disciplinary Team that they were conducting an investigation and ordered the driver of the vehicle to stop for a routine control and to have the vehicle searched which the driver refused to do and took off at high speed in the direction of the Dutch side.
On request of the Gendarmes a search of the vehicle was done by the Multi Disciplinary Team and a small amount of marihuana was found. The suspect was arrested on the spot and taken to the Philipsburg Police Station for further investigation. The suspect was brought before an Acting Prosecutor who informed the Prosecutor on call of the situation. There was at no moment any confrontation between French and Dutch law enforcement officers.
After the suspect was questioned the and a hefty fine paid for the possession of the marihuana the suspect was released as there were no other legal reasons to keep him in custody.
It is important to mention however, that there are discussions going on between the French and the Dutch law enforcement regarding the working relation and cooperation and mainly issues regarding the crossing of the border. The discussions will continue and finalized and hopefully implemented in the near future.