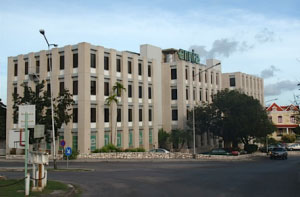 WILLEMSTAD – Ennia, the largest insurance company in the Dutch Caribbean, has been financially weakened by its owner, the Iranian-American businessman Hushang Ansary.

This emerges from a secret De Nederlandsche Bank (DNB) report, which has been seen by the Financieele Dagblad (FD) (Dutch Financial Newspaper). The document is dated June 2015.

Some 570 million were taken by the wealthy businessman from Ennia’s resources to invest in other companies within the group owned by Ansary. It is a so-called pocket-pocket transaction in which the profit actually stays within the company.

The DNB now shows that tens of thousands of policyholders of the insurance company are now without sufficient provision of insurance and they are not even aware of this.

The ‘draining’ of the insurance company happened under the watchful eye of De Nederlandsche Bank (DNB) and the Central Bank of Curaçao and Sint Maarten (CBCS).

Sources report to the FD that the DNB management was already warned in 2011 about the practices. The regulator called for an investigation four years later.

DNB has doubts about the integrity of fellow supervisor CBCS in Curaçao. It’s such a mess in the CBCS, DNB requested additional powers, and got it, to act on CBCS territory.

That emerges from the FD investigation in response to lingering problems in the insurance company.