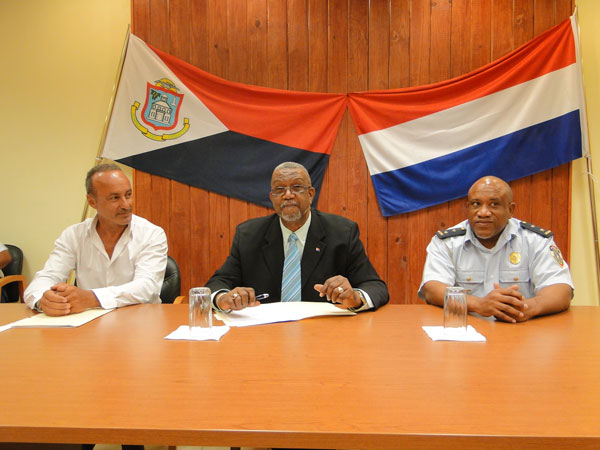 PHILIPSBURG:— On Monday May 23rd, the Justice Minister Edson Kirindongo, while on official visit at the police headquarters in Philipsburg and the representative/real estate agent of Remax Elite Mr. Antonio Pomato signed the final documents for the purchase of the SOREMAR building located on the Orange Grove road in Cole bay. The signing of these documents was witnessed by the chief of police Carl John and several other officers that were present.
The purchasing of the SOREMAR building to be used by the KPSM was an issue that was being discussed over a year. The SOREMAR Building will be used by the KPSM who has been in serious need of a proper facility to install two indoor shooting ranges, provide space for physical training for their personnel, for the expansion of the Forensic Department and the installing of the Emergency Dispatch Center.
The purchasing of this building is a major step forward for the KPSM where the training of its personnel is concerned mainly in order to improve their skills and level of professionalism. The Minister of Justice has definitely seen this as necessity for the Justice Department and has done is utmost to see this become a reality.