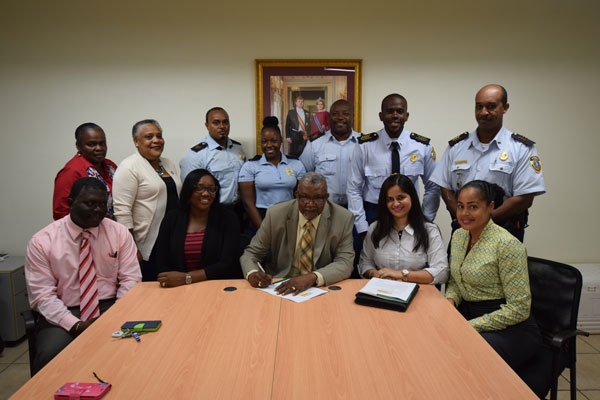 GREAT BAY— For the first time in St. Maarten’s history, employees who fall under the Justice Ministry now have full insurance coverage for Accidental Death and Dismemberment. This was all made possible by the Minister of Justice; Edson Kirindongo who collaborated with the three unions ABVO, WICSU, and NAPB, which represent the Justice workers, to negotiate and provide coverage for the staff.
NAGICO Insurances was selected as the insurer of choice after winning the bid which included 5 other insurance companies. At the signing ceremony, yesterday held at the Cabinet of the Minister of Justice; the insurance company revealed that since the offering was announced, other territories and Government departments have contacted them to query about similar offerings.
Members of the unions and staff who were in attendance to witness the signing expressed their elation at this accomplishment since it has been a benefit they have been championing for so long. “As a union representative and a first responder, I am very happy now that we have signed this insurance coverage agreement,” Officer Rumini Rogers said. “This is a benefit that gives us comfort to know that our families will be taken care of in the event anything should happen to us and I want to thank NAGICO for all the work they put into making this a reality.” 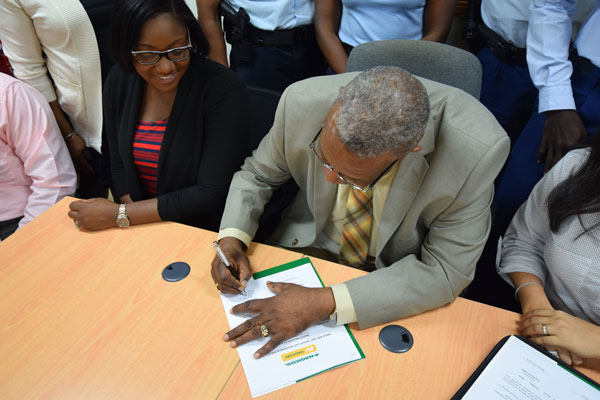 Minister Kirindongo gave a sobering message to his staff. “I don’t know who will be the next minister of Justice, but I am very happy that I could have gotten this done for my workers during the short time I was placed in this position,” he said. “Getting the monies to fund this benefit was not easy and I was heavily criticized for doing so, but as a former police officer and from experience, I have seen how hard the first responders work and I have even most recently how difficult is on their families when they are disabled or killed and there is no benefit to assist them, so I am very proud of this accomplishment and want to congratulate the unions for being vigilant in ensuring that this came to pass.”
Under this policy, all employees of the Justice Department who accepted this coverage will have coverage for life, accidental death and dismemberment 24 hours a day, even while travelling overseas. The coverage in case of accidental death is Naf. 200.000 and the Accidental Death & Dismemberment coverage is Naf. 200.000. In the event a claim is filed, the benefit will be paid out to the beneficiaries named by the civil servant.
The Minister, however, reminded that this policy is not mandatory and is a participation plan, so the Justice workers should ensure that if they opt out of accepting the insurance as a few have done, their families are not entitled to the benefits outlined in the policy.