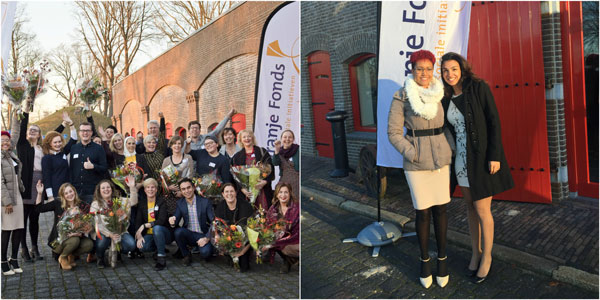 Utrecht, The Netherlands:— K1 Britannia Foundation, representing St. Maarten as a nominee for the Appeltjes van Oranje award was invited to attend the regional round for organizations in the Netherlands.

K1 Britannia Foundation representatives Priya Thirumur and Yasmine Essed attended the event alongside 40 organizations from The Netherlands, executives and representatives from Oranje Fonds, and the Government.Once all 40 organizations from The Netherlands gave their presentations, 10 organizations were then chosen to move on to the finals. K1 Britannia Foundation and Child Focus from Saba were previously selected for the finals at the Caribbean regional round in Curacao in November 2016. Together, the 12 nominees will vie for the “Appeltjes van Oranje” award.
Appeltjes van Oranje is an annual award of the Oranje Fonds for initiatives that have successfully managed to connect different groups of people, and successfully create a livable society. In doing so they are an example to others. The theme this year is “Powerful Children” focusing on children that grow up in vulnerable situations. The prize consists of a bronze statue, made by Princess Beatrix. Each year 3 organizations are awarded the “Appeltjes van Oranje” award which is handed out by either Queen Maxima or King Willem-Alexander. This event will take place at the Palace in May where K1 Britannia representatives will have the opportunity to meet and have coffee with the King and Queen.

The experiences on this journey to the finals in May have been invaluable.
“It touched my heart to see how enthusiastic everybody from the Oranje Fonds and Government officials and others who were at the event were to see that St. Maarten and the Caribbean were participating and had made it to the final round. They were excited to be able to promote and support organizations making a difference in St. Maarten and in the Caribbean. They told us many times that us being in the final round is something St. Maarten should be proud of. Yasmine Essed, as a 17 year old is a young person that St. Maarten should be proud of. She did a great job representing St. Maarten and children at risk in the Caribbean” expressed Priya Thirumur.
“I’m so honored to have been able to be a part of such a great event. The representatives from the Oranje Fonds are so warmhearted and welcoming, they really make you feel that you are an important part of making the Dutch Kingdom a better place. We got to meet allot of great people that we were able to share our ideas and experiences with. I couldn’t be more proud that St. Maarten is one of the 12 nominees. It’s already a great victory for St. Maarten that we’ve reached so far” stated Yasmine Essed.
Being in the finals brings great exposure to our target group, abused children and the need to assist them. It also highlights local projects and St. Maarten as a whole. We are extremely thankful and appreciative for this opportunity.