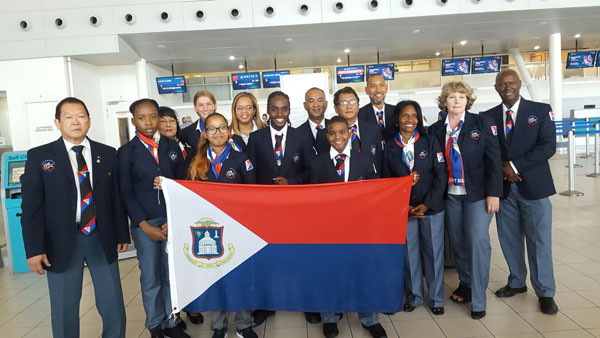 PJIAE:—  Athletes from the St. Maarten “King Yen Tae Kwon do School are on the move again – this time to Kokkiwon, Korea.
It’s one of the group’s most ambitious trips to date with sixteen athletes and a support staff of seven taking part, including Grand Master Theo Liu of the King Yen School.
Before leaving for the trip, Master Lui and a delegation of the group thanked their supporters and sponsors in the St. Maarten community for their help in making the trip a possibility.
“We are all grateful to the people of St. Maarten and the many businesses who help us when we ask,” said Master Lui.

According to Master Lui it is a once in a lifetime opportunity for any martial artist to, not only visit one of the homes of martial arts in the world, but also to study and train there.

The trip is being described as sporting and cultural in nature because the St. Maarten athletes will take part in martial arts workshops, compete against martial arts practitioners of their age groups and also have an opportunity to visit various places in Korea to soak up the local culture.
“Korea is the home of Taekwando and the Taekwando Club of St. Maarten is honoured to show how we have progressed in the sport at an international level,” said the Grand Master shortly before the group left the island Tuesday.
He is convinced the group will once again give a good account of itself and make St. Maarten proud.
The team proudly displayed the St. Maarten flag and matching sports blazers and ties to make an even stronger impression on the hosts when they arrival there late Wednesday.
They will be in Korea until July 22.
Amongst those participating and competing in the visit are:
Tyrell Pantophlet, Destiny Washington, Freya Knaggs, Lee-Ann Liu, Marijn Luijcks, Naomi Loor, Malik Loor, Ivyanne Louisa, Rani Raghosing, Mira Raghosing, Surya Raghosing and Justin Wilson plus adult athletes Carlo Talkami, Angela Heyliger, Paul Djasmin and Julian Fleming.
The support staff includes delegation leader, Theo Liu; therapist, Paulien Vuijst; photographer, Leopold Gumbs; coordinators Betty Liu and Charlene Craig and doctors Radha Sanchit and Anand Raghosing.

Team members said they were looking forward to the workshops and to learning more Taekwondo techniques from a host of new coaches of the sport.

They are also looking forward to seeing some famous Korean landmarks, shopping and attending the 10th World Taekwondo culture expo that is taking place during their time in the country.