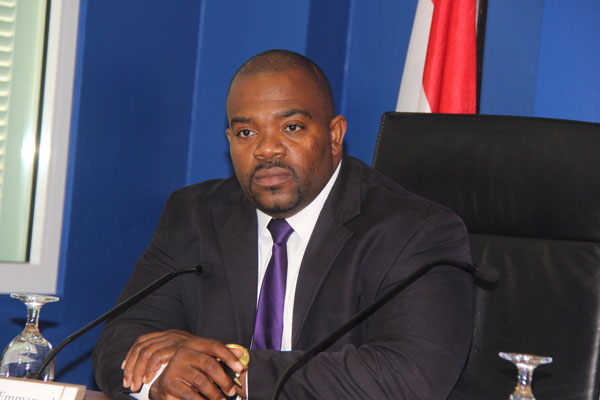 PHILIPSBURG: — Minister of VROMI Christophe Emmanuel announced on Wednesday that he is somewhat pleased with the reaction from the residents of St. Maarten that are now taking their heavy household garbage directly to the landfill and not dumping it alongside the roads. Emmanuel said he is also somewhat pleased with the contractors that are picking up the garbage as it appears as though since the fines were issued the collection of garbage is somewhat steadier.

The Minister further explained that he has to sit with the contractor from the Middle Region area because that area still has some work that has to be done, he said he wants to give everyone a fair chance before levying fines. Apart from that, the Minister said one of the things that have top priority for the Ministry is the landfill that outlived its lifespan about 10 to 15 years now. He said that he will be looking into finding a permanent solution for the landfill and the dumping of waste.

Minister Emmanuel also made clear that the community councils should get more involved in updating and encouraging the residents in their area to start keeping their surroundings cleaner. He referred to the days when Rolando Tobias was the President of the St. Peters community council and how active that community council was in those days. The Minister further stated that St. Maarten is a tourist destination and the residents of St. Maarten has to learn to keep the island clean in order for the visitors to return to St. Maarten.
Another problem the Minister said the department of VROMI is addressing is the constant flow of sewage water. He said that the department intends to beef up their inspection in order to bring the constant flow of sewage under control.

As for the car wrecks that the Minister said has to be picked up and became a target by certain media houses because he has an old vehicle parked in front of his home. Minister Emmanuel explained to the media when he was asked about this old vehicle that he was instructed by the police and prosecutor not to touch the vehicle neither clean the area around the vehicle since there was an explosion in that vehicle some months ago which is still under investigation. Emmanuel said that his neighbor also has a vehicle parked behind his vehicle and the owner of that vehicle was told the same thing. He said to date he has not heard anything from the police regarding the investigation and the only thing he knows thus far is what he read in the newspapers where the prosecutor stated that the investigation is ongoing.