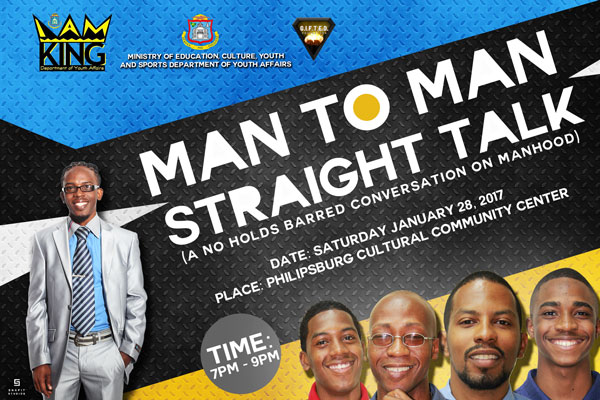 PHILIPSBURG:— The Ministry of Education, Culture, Youth and Sport, as part of its I AM KING Program, is organizing a male empowerment panel discussion entitled “Man to Man – Straight Talk, A No-Holds Barred Conversation” for Saturday, January 28th, 2017 from 7 pm to 9 pm at the Philipsburg Cultural Center. The evening will be centered around two themes; Manhood 101 and the Role of a Man. The discussion on Manhood 101 will focus on questions such as “What it means to be a man?” and “How do I be a man?” as well as discuss the challenges and conflicting ideologies of manhood. The second discussion of the night will focus on the Role of a Man and will be centered on topics such as fatherhood and relationships. For both discussions, there will be two panels leading the discussion; one panel of youngsters and one panel of older men. The goal is to stimulate and facilitate discussions between these two groups of men and get their views of manhood from their perspectives. Participation will also be encouraged from the audience as persons will have the opportunity to participate in the discussion and ask questions and/or give their opinions. Entry to the event is free and the general public, especially men, are encouraged to come out and participate in this very vital discussion.
This Panel Discussion forms part of a trilogy of events for the I AM KING Program. In December, a male empowerment youth forum under the theme “Managing my Reality” was held where approximately 180 young men between the ages of 15 and 20 years old had the opportunity to discuss prevalent issues and topics affecting them today. After this upcoming panel discussion, the organizing committee will gather the information and pointers that came out of both events and host a stakeholders’ session where a plan to further stimulate male empowerment in 2017 and beyond will be devised.
If you would like more information on the I Am King Trilogy of Events, please feel free to contact Project Manager Janelle Presentacion at 542-3904 or via email at This email address is being protected from spambots. You need JavaScript enabled to view it.
document.getElementById(‘cloak61d7a3085a626585c3fb57da6e9900b0’).innerHTML = ”;
var prefix = ‘ma’ + ‘il’ + ‘to’;
var path = ‘hr’ + ‘ef’ + ‘=’;
var addy61d7a3085a626585c3fb57da6e9900b0 = ‘janelle.presentacion’ + ‘@’;
addy61d7a3085a626585c3fb57da6e9900b0 = addy61d7a3085a626585c3fb57da6e9900b0 + ‘sintmaartengov’ + ‘.’ + ‘org’;
var addy_text61d7a3085a626585c3fb57da6e9900b0 = ‘janelle.presentacion’ + ‘@’ + ‘sintmaartengov’ + ‘.’ + ‘org’;document.getElementById(‘cloak61d7a3085a626585c3fb57da6e9900b0’).innerHTML += ‘‘+addy_text61d7a3085a626585c3fb57da6e9900b0+’‘;