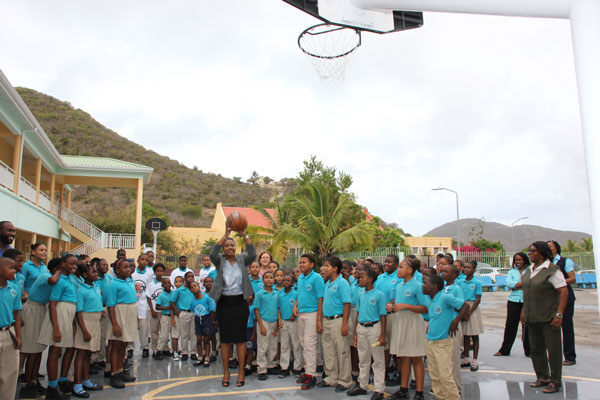 PHILIPSBURG:— Minister of Education Culture Youth & Sports Silveria Jacobs was on hand at the Marie Genevieve de Weever School on Monday morning to witness the finalized works to the Playground / Basketball Court and addressed the students as well as management and staff.

The Minister Jacobs officially thanked the young, local contractor Mr. Ricky van Putten of Designer’s Choice NV for the work he had done in alleviating the challenge of gravels on the playground and creating a play space for the children, as well as sitting areas and going beyond his contract to assist the school. The rerouting of water underground that was falling in that area was also addressed.

The issue of gravels on the playground was one of the serious challenges listed by teachers as hampering education at the school. Teachers and staff have seen an improvement in student behaviour and a calmer atmosphere since the gravels have been removed. The space now boasts an outdoor basketball court which the students can utilize to build their skills and play in a structured manner.

Mr. van Putten also supported the Island Hoops foundation which promotes “Shoot Hoops not Guns” and addressed the students on this topic and handed out t-shirts to the students. Minister of Sports Jacobs further reiterated that she hopes the students will make good use of the new amenities at their school while making sure that safety and good sportsmanship was part of their play and games. She reminded them that they had a responsibility to take good care of their school.

During the event teachers encouraged the Minister of Sports to take the first shot with the ball donated by Mr. van Putten which she obliged. Even though she missed the first shot, she was able to hit the second to the cheers of students and teachers alike. Minister Jacobs encouraged the students to continue to be engaged in positive activities which would help build strong character and a strong St. Maarten. 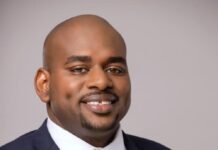