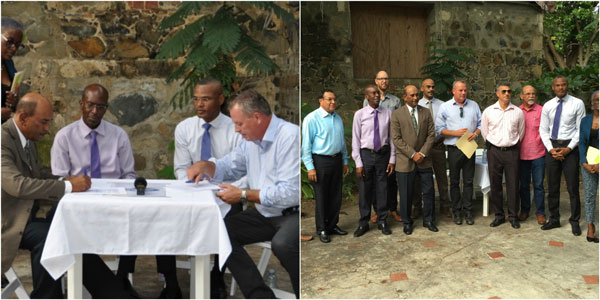 PHILIPSBURG:— With the final awarding of contracts, the first of several major developments to take place at Mary’s Fancy estate, as part of projections being formulated for future use of the estate, are now set to start. This follows the 2014 acquisition of the estate by APS, St. Maarten’s general pension fund administrator in 2014.
On Monday, officials of APS and the company contracted to restore, among others, the historic rock walls of the estate, signed documents signaling the beginning of restorations works, which were awarded following a bidding process. St. Maarten’s Minister of Finance, Honorable Richard Gibson, signed as a witness.
The works forming part of a first phase of restoration initiatives are to cover the adjacent trench as well as a new entrance and exit path to and from the estate.
Projects and Goals
The rehabilitation envisioned is to implement improvements to the characteristic structures of Mary’s Fancy estate, including the plantation house, the sugar mill (which is actually a boiling house and chimney), the estate grounds and the rock wall.
The process for each real estate development project within APS consists of the development, engineering, advising, tendering, evaluation of bids, contracting out, outsourcing of the supervision of construction, monitoring of the budget and expenditures, progress reporting of and on each projects. The overall projects include a pre-development phase, the conceptual and basic design and the engineering phases.
Re-construction of Rock Walls
The wall on the west boundary of the L.B. Scot Road Wall is a ruin, with trees having caused damage as did passing hurricanes.
The total length on the west boundary wall is approximately 130 meters, including the span over of the Zaegersgut.
Points of attention are: The height of the wall, the number of columns, the location of the wall, hurricane withstanding requirements, the safeguarding of the wall, according to the project team.
The height of the wall and the number of columns are aesthetic aspects that have an effect on the structural requirements to comply with the hurricane withstanding standards, in particular on the design of the foundation.
The wall’s southeast boundary runs along the Gladiola Road. There is no rock wall at this boundary. Just like the west wall at the L.B. Scot Road the south east boundary qualifies for having a rock wall. The design and construction specification are expected to be similar as for the L.B. Scot Road wall.
The APS board has discussed and indicated the priorities in the areas that need attention in terms of short term improvements and the development of plans for midterm execution.
APS advocates the realization of activities identified under specific smaller projects, part of a total approach, that is being developed, engineered and executed.
One of the first most visible changes, the public is thus to notice shortly, is the reconstruction of the centuries old rock walls and new construction of a sidewalk in pavers, with works expected to start during the month of June. Completion is projected for November