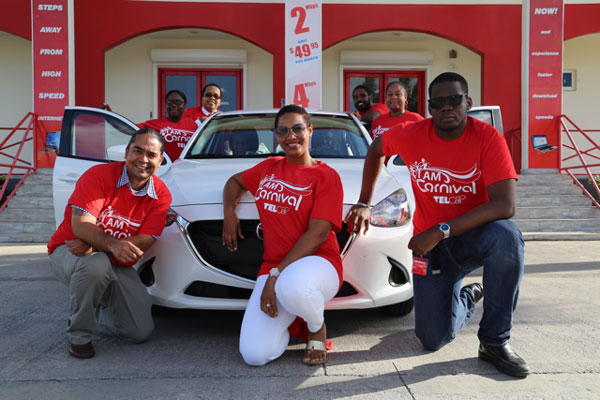 Pond Island:–– TelEm Group’s carnival promotion team have taken the wraps off a spanking new four-door Mazda2 Sedan that will go to the lucky winner of this year’s “I Am Carnival” SMS promotion.

The super ride can be seen on show at the Festival Village where it will remain until the winning prize is claimed on the last night of Carnival.
Organizers say all subscribers have to do is send as many SMS messages with the word Carnival to 7777 as they can. The person sending the most messages from now until the night of the Burning of Momo on May 3rd, 2016, when the winner is announced – takes home the 2016 Mazda 2 Sedan prize.

The gleaming white Mazda2 features: keyless entry, bluetooth audio and phone system, push button start and dual transmission. The prize model also comes with a black interior with red trim on the dashboard – and a cool pop up screen.

Promotion organizers say each SMS sent during the promotion will cost $1 and conditions, such as a minimum age requirement will apply.

“This is the first time TelEm Group will be offering such a terrific prize during Carnival to further promote our involvement in the island’s premier touristic and cultural event,” said Carnival team coordinator, Grisha Marten.

She said Carnival revelers who are not fortunate enough to win the top car prize will still qualify for a host of other fabulous prizes that will also be available to those who text the most messages of the word “Carnival” to 7777.

The other prizes include: A 50” flat HD screen TV; an iPad Pro; a HP Laptop; an iPhone 6S and an iPhone 6 Plus and a Samsung S6