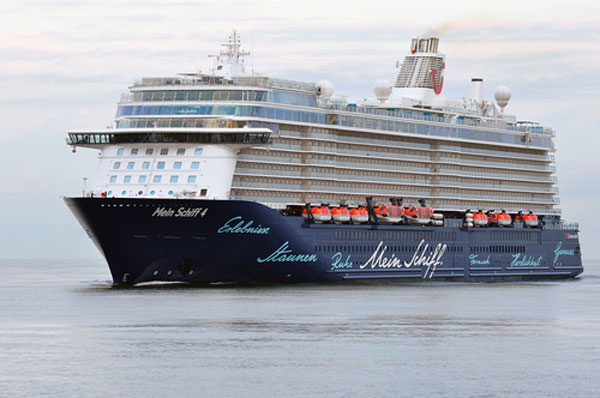 POINTE BLANCHE:— The first new cruise vessel on its inaugural call for the month of November is Mein Schiff 4 which will dock on Wednesday, November 9. The vessel is the newest member of the fleet of TUI Cruises and is identical to her sister-ship the Mein Schiff 3.
Mein Schiff 4 is the first of five new cruise ships that will be making its inaugural call this month to the destination.
TUI Cruises, a German cruise line, is a joint venture of the German tourist firm, TUI AG and Royal Caribbean Cruises.
Catering to the German market is one of Port St. Maarten’s marketing strategies which has been promoted over the years while attending cruise conferences and having discussions with cruise line executives.
Port St. Maarten will be welcoming the new vessel to its shores on Wednesday with the traditional plaque exchange and words of welcome.
The vessel was built by Meyer Turku Shipyard in Turku, Finland. The vessel was floated out on 10 October 2014 and delivered to TUI Cruises on 8 May 2015. A Mein Schiff 5 is to be delivered in 2016, and 6 in 2017. Orders have also been placed for Mein Schiff 7 and 8 with deliveries in 2017 and 2018.
Mein Schiff 4 has a gross tonnage of 99,526; length 962 feet; beam 139 feet, and can carry 2,790 passengers and 1,030 crew.