Home Local News Members of the Royal Marechassee sworn in. 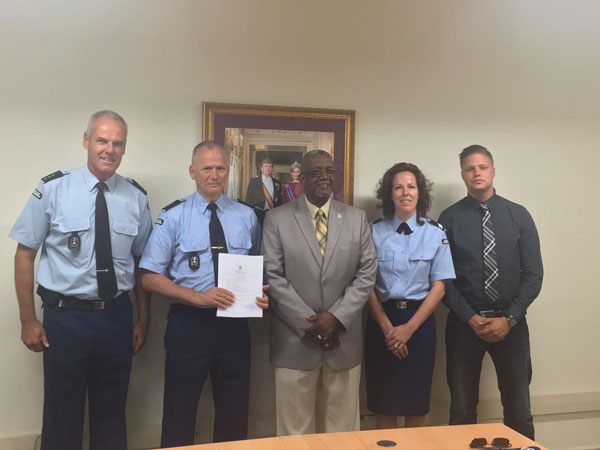 PHILIPSBURG:— On Friday June 17th 2016 during a short ceremony at the office of the Minister of Justice three new member of Royal Marechaussee were sworn in by the Justice Minister Edson Kirindongo. The Head of Operations for the Royal Marechaussee on Sint Maarten Commander Ewout van den Heiden will be transferred to Curacao and will be replaced by Commander Christian Hesen. Officers Brenda Bruggeman en Danny Posthuma will both be working at the Border Protection services.
During the ceremony the minister thanked the outgoing commander E. van den Heiden for his services and contribution he made time in command on Sint Maarten and wished him much success when he takes his new post on Curacao. (See pic attached. From L. to R. E. van den Heiden, C. Hesen, Justice Minister E. Kirindongo, B. Bruggeman and D. Posthuma)
Ongoing investigations:
Detectives are presently investigating a case in which two persons were arrested for the use of false credit cards. These persons arrived on the island on Sunday June 19th with the KLM flight originating from the Netherlands. These suspects remain in custody for further investigation.
Detectives are investigating a case whereby one person was injured and had to be taken to hospital for medical treatment after a brawl had taken place on the Rock Salt Road. One suspect with initials W.A.B. was arrested and put into custody pending further investigation.
The Special Robbery Unit is investigating an armed robbery which took place in Simpson Bay between Saturday June 18th and Sunday June 19th at approximately 03.30 a.m. The victim was attacked in the drive way of him residence by an unknown armed man who forced the victim to hand over all his belongings. The victim was then forced into his home where a fight broke out between the suspect and the victim. The suspect managed to get away and flee the scene.
On Friday June 17th two teenagers who were attending a school dance at a secondary school was caught in the possession of a small amount of marihuana. Both teenagers were arrested and taken to the police station where they were questioned. After being questioned they both received a “conditional dismissal” and were allowed to leave in the care of the parents.