Brothers and sisters in Christ,
Twenty-two years before the Proclamation of Emancipation on St. Maarten, the Catholic church was established on this half of the island with Fr. Arnold ten Brink as the first parish priest. He laid the cornerstone for the present St. Martin of Tours Parish church on Frontstreet and with that began what would turn out to be a profound transformation of the island.
For the last 175 years, the Catholic church has had a very significant impact on our lives, not only in the spiritual realm, but also in the educational and social fields. No wonder the church grew by leaps and bounds. The parish took its ministry directly to where the people lived, in the districts of Colebay (where after 35 years, the church was gutted by fire in 1872 and never rebuilt again), Simpson Bay, and Reward. On May 30, 1952 the church on Frontstreet was built, costing 132, 659 Dutch guilders. Imagine what that amount would represent in today’s currency! I understand that the aim now is to build a church in Belvedere, a goal I am confident the parish would accomplish by the grace of God.
But wherever the church was established, a school soon followed. Who, among my generation, does not remember the nuns? Six of them were sent to St. Maarten from Holland, arriving here at 8:00am on May 30th, 1890 via St. Kitts. By Monday June 2nd, 1890, St. Joseph School opened its doors as the first Catholic school on the island! That was only three days after the arrival of the nuns. Sister Regina was its first principal.
Since then, Catholic education has been second to none on the island. Not only did St. Joseph school admit Catholic students, but also non-Catholics as well who reportedly came from more well-to-do families and hence fell in the section of paying pupils. With a total enrolment of 132 students – 62 in the kindergarten, 56 in two other classes and 14 in the paying section – St. Joseph was no doubt the largest school on St. Maarten.
It is amazing that the same issues that confronted the nuns at the time are still being discussed today, more than a century later. They included discipline and most remarkably, the language of instruction. History shows that four of the six nuns had to learn English quickly from some St. Maarten ladies in order to teach in English and improve the performance of their students! The more things change, the more they seem to remain the same!
Three years after its establishment, the school received 400 Dutch guilders as government grant. This was increased by 50% the following year. Today, government subsidizes all the six Catholic primary schools and one secondary school on the island. This is the kind of public-private partnership that has contributed to the development of St. Maarten in all areas.
As we join the Catholic community in celebrating 175 years of continuous existence on this half of the island, we must remember that Catholic means “universal” and that one of the basic beliefs of all Catholics is the inherent goodness of all God’s creations. In other words, that God created everything to be good and perfect, but it is we who mess things up through our disobedience or refusal to live by His commandments, the greatest of which is to love one another as He loves us.
That love must be manifested in our deeds, not just in our words. As Pope Francis once said: “The secret of Christian living is love.” “Love,” he also said, “is the measure of faith.”
The Catholic Church has shown tremendous faith in St. Maarten over the past 175 years.
Therefore, on behalf of the government and people of St. Maarten, I wish to hereby congratulate the entire Catholic community on this historic celebration. May the grace of God continue to abide by all of us.
God bless the Catholic church. God bless St. Maarten.

Source: St. Martin News Network
Message of PM William Marlin on Occasion of the 175th Anniversary of the Catholic Church on St. Maarten.

September 29, 2022
0
PHILIPSBURG:--- The lack of data and its effects on proper and effective government planning and policies has been identified in various Ombudsman reports. In... 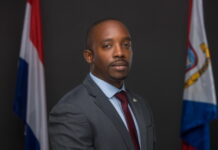