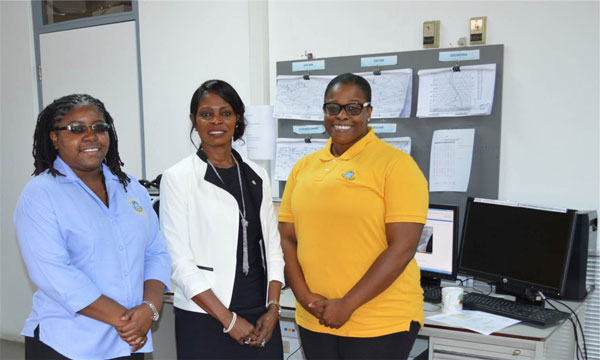 Arrindell, who is responsible for Tourism, Economic Affairs, Telecommunications and Transport (Ministry TEATT), was briefed about the status of the relocation of both departments, which is related to the airport expansion project.

The tour included the current locations of both service providers, as well as the new temporary locations at the former Turtle Pier Building, and two buildings adjacent to the Airport Control Tower.

Minister Arrindell had discussions with management of both departments on challenges they faced and got a better understanding of the operations of the departments.

The Minister was also able to have discussions with contractors from Vaisala; a meteorological supplier who at the time was completing installation of a new state-of-the-art Automatic Weather Observatory System.

“I was very impressed with the information received from both departments. The hurricane season is two weeks away and the new observatory system will be a tool that can be used by our forecasters when making their forecasts regarding inclement weather both during, and out of the season.

“Both departments have come a long way since their inception, and I thank, on behalf of government and the people, the management and staff for their continued good work,” Minister Ingrid Arrindell said on Tuesday.

Two staff members, from MDS have been involved in a training program: Desiree Connor, who completed a twenty-one month Senior Level Technician Course (Forecaster) at the Caribbean Institute for Meteorology & Hydrology (CIMH) in Barbados and returned to MDS in August 2015, and Charis Mathew, who completed the Entry Level Technician Course (Observer) at the CIMH in Barbados in December 2015. These members of staff are now certified to carry out their various tasks as forecaster and observer.

“I congratulate both staff members on their achievements. Upgrading of staff is very important in order for them to be able to properly carry out their job, on behalf of the people of this country, as civil servants in public service,” Minister Ingrid Arrindell said.