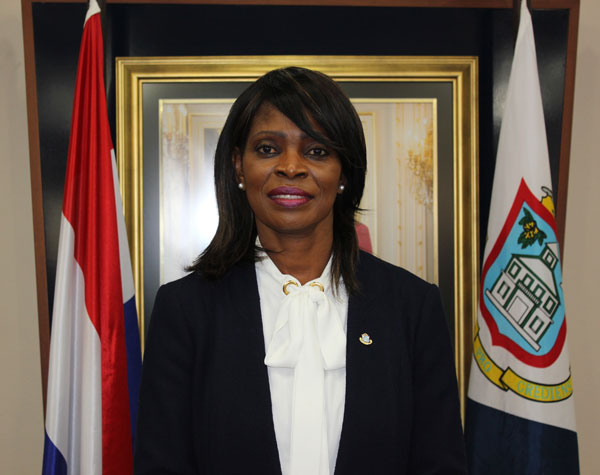 PHILIPSBURG:— Minister Arrindell has stated that the tone and content, which consisted of innuendos, accusations, and condemnations made toward her in the editorial written by Mr. Hilbert Haar in which he stated that it appeared that she has been lying about the candidacy of Mr. Rolando Brison as the Interim Director of the Sint Maarten Tourism Authority Foundation (STA), and that contrary to what the Minister claimed in August, Mr. Brison was not the top candidate selected by every member of the (Selection) Committee, was nothing but an inept attempt at character assassination.

In the selection process for the Interim Director of the STA, eleven applicants were chosen to interview. Of those applicants, the three highest-scoring persons were invited to proceed to the second round. In the second-round the applicants were requested to present case studies, and the applicant with the highest total score was Mr. Rolando Brison. Those are the facts.

Furthermore, the selection committee had decided that each member would rank the three candidates, in separate, independent, motivated emails, based on whom he/she believed was best suited to hold the position – independent of the scores achieved during the interviews. Those rankings were submitted to Minister Arrindell. Of the six members of the selection committee, which included the Minister, five members ranked Mr. Brison as their top candidate. Five out of six chose Mr. Brison as best suited to be the “Interim Director of the STA. Those are the facts.

Clearly, Mr. Brison was the preferred candidate, by an overwhelming majority, during the open and transparent processes in which the Supervisory Council fully participated. That is a fact.

Contrary to what has been reported in the media, there was never an agreement to perform background checks on all three candidates. Such a decision would certainly not have been in keeping with normal business practices, given that one candidate had already been selected as the preferred candidate.

a) Background check specifically at WINAIR due to vague rumors that had circulated in the past.
b) Requests for references from previous employers
c) Police report
d) Health report

The sly innuendos that MP Matser was somehow involved in the selection of Mr. Brison is clearly totally false. The honorable MP happened to be in the building on other business when the offer letter was to be presented to Mr. Brison, and given the importance of the event, and out of professional courtesy, the MP was invited to witness the signing. That was the full extent of the MP’s involvement. At no other time, in any way whatsoever, was the MP involved in the selection process.

Supposedly we live in a democratic society in which people are not judged based on rumors, but on facts. Especially when those rumors have been debunked time and time again. Mr. Brison received a “clean” police record. Mr. Brison’s former employer WINAIR, where fraud was allegedly committed, provided a positive reference, as other former employers, colleagues, and associates provided glowing recommendations.

So, what should the minister do? Cast aside and ignore the fact that Mr. Brison (in an open and fair selection process) was overwhelmingly chosen to be the director of the STA? Should she cast aside the fact that his background check showed absolutely no reason to deny him the position, but on the contrary, gave full and overwhelming support of his ability to hold the position.

We must therefore ask ourselves, on what basis then is the STA’s supervisory council stating that they cannot support Mr. Brison as the director? Since it has been proven that he is eminently (professionally) qualified and there is nothing in his past to disqualify him, perhaps there are other qualifications that he lacks? Does he have the wrong nationality/ethnicity (Dutch/local St. Maartener) perhaps? Does he associate with the wrong people (other young, local, entrepreneurs instead of elitists) perhaps?

It should be noted that at no time did the supervisory council, every member of which sat on the selection committee, advise the Minister that there was an objection to any part of the selection process. Further, at no time did any member of the supervisory council inform the Minister that they “could not and would not” appoint Mr. Brison as director. Instead, during the final days as the Minister prepares to leave office, these incorrect and malicious distortions of the truth are presented to the public. And rather than properly investigating these statements and allegations, a “newspaper” that claims to report accurate and unbiased information “chose to not only publish that misinformation and disinformation, but to also label a sitting minister as a “liar”.

“During my term as Minister I have acted in the best interest of the people of St. Maarten. I have acted with complete integrity and good will. I tried to ensure that a qualified, young, local St. Maartener got the position that he is eminently suited for – in other words, I practiced what I preached.

It appears that once again, however, some groups among us continue to do their best to destroy the character and spirit of one of our own – a young man of so much potential. And why not try to kill two birds with one stone, why not try to destroy the character and reputation of the Minister who tried her best to ensure that that young man got the position he so rightfully deserved?

I considered demanding an apology for, or at least a retraction of, the totally incorrect and misleading information presented by the supervisory council, and the relish with which the “editor” of that “newspaper” so happily published those lies and misrepresentations of the supervisory council. However, I recognize that our local Sint Maarteners are discerning people who have become very familiar with how a few of those among us continually try to destroy our local professionals. At the end of the day, the opinions and comments of the evil among us do not matter. It is the opinions and comments of our good St. Maarten people who support each other and look for our young qualified, professionals to succeed in their own country, whose opinions and comments ultimately matter. I, therefore, rest my case.” stated Minister Arrindell.