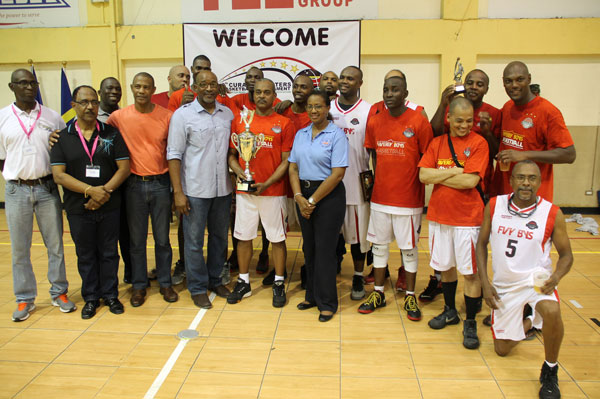 PHILIPSBURG:– On Friday, November 4th, the Minister of Sports, Silveria Jacobs, attended the final game of the 9th CuraSur Masters Basketball tournament in the sports auditorium. The countries represented in the 9th annual veterans’ tournament were Curacao, Suriname, French Guyana, Holland and St. Maarten. The tournament was opened by the Minister on Monday, November 1 with the anthems of each country being played, while the country flags were displayed. The tournament was hosted by the Rebels, a veteran team of St. Maarten which has participated in the tournament over several years.

The winning team received their trophy from the founder of the CuraSur Masters Tournament, while Minister Jacobs proudly presented the trophy to the second place winners – Team Rebels of Sint Maarten, who only lost the last game against the champions. Curacao placed third in the tournament and also received a trophy.
All teams received a participation plaque, which was presented to their representatives by Minister Jacobs and President of Parliament MP Claret Connor.

Minister Jacobs would like to congratulate the winning team, Suriname on a game well played. It was evident throughout the week that they were quite dominant throughout. The Minister would also like to congratulate the organizers, officials, volunteers and all the players of the participating countries on a “job well done” which contributed to a successful tournament.