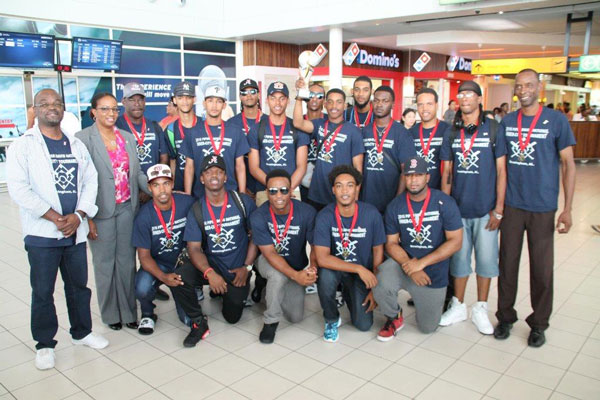 PHILIPSBURG:— Minister Jacobs, along with family, friends and spectators welcomed the Under22 team from Piper Davis Tournament in Birmingham, Alabama.
This was the2nd National Inner-City Tournament which ran from July 11-16, 2016. The Piper Davis National Youth Baseball League and the City of Birmingham anticipated an overwhelming number of teams from across the U.S. and the Caribbean, with as many as twelve hundred players participating. Players’ ages ranged from eight to twenty two.
This event allows participants to engage in a quality tournament experience, diversity, travel and affords opportunities for players to exhibit their athleticism. It also allows college coaches an opportunity to scout high school participants, thus opening doors of opportunity for higher education.
Minister Jacobs congratulated Team Sint Maarten, who left the tournament as Sub-Champions, along with MVP of the game Denzel Brooks. She also commended the team and their coaches for their time and dedication in preparing for the tournament, given that many of the payers have not been paying baseball consistently as they have aged out of Senior Little League division.
Jacobs continued to encourage the team and the youth of Sint Maarten to recognize that although sports are important, the academics should always be the core of any endeavors or opportunities that may arise. Students must put as much, if not more, effort into academic studying, as education will always be there in the long run to ensure a secure future. Sports are an amazing representative of not only the talent on Sint. Maarten, but as a leading example to future generations of Caribbean athletes throughout the region.