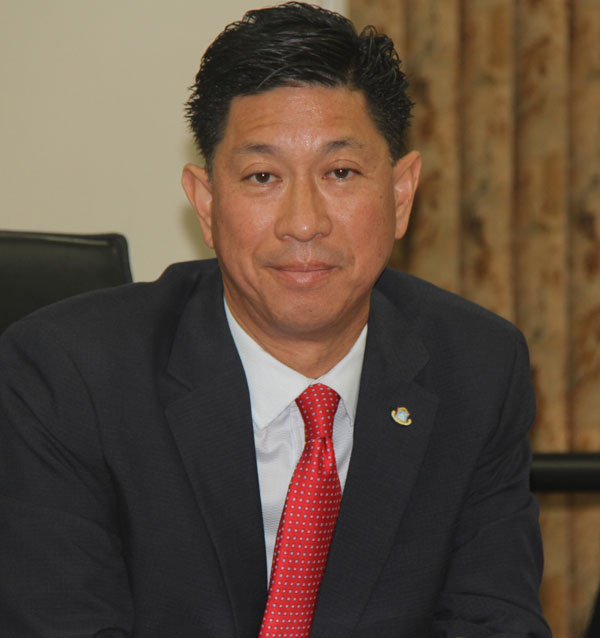 PHILIPSBURG:— -During Wednesdays Press Briefing, Minister of Public Health, Social Development, and Labor Emil Lee stated that “Adjustments to the old work permit policy for adult entertainers, were made in order to prevent any abuse, and to ensure that Government doesn’t facilitate human trafficking”. He also mentioned that “the policy will serve until the Ministry of Justice, and the Ministry of Tourism, Economic Affairs, and Transportation develops their permanent policy/solution for the adult entertainers”.

Due to a memo received from the prosecutor’s office earlier this year, the Council of Ministers agreed that the Ministry of Justice, and the Ministry of Tourism, Economic Affairs, and Transportation would develop and present a new policy for Commercial sex workers.
In the interim, the court ruled that Ministry VSA needed to accept requests for adult entertainers and process within 2-3 weeks. Based on a ruling, Ministry VSA in consultation with legal advisors, and representatives of the adult entertainers industry have developed an interim policy which was approved by the Council Of Ministers last week.

Minister Lee also clarified that the Ministry of VSA is only allowed to issue work permits, and in this case only issues permits for exotic dancers and animeermeisjes(adult entertainment workers). “We cannot issue permits for sex workers. If we grant permits for sex workers, we would be creating an employer and employee relationship between the company and the women to be obligated to perform sexual acts, and that is something that Government cannot facilitate” he said.

• The brothel owner is not allowed to provide money/loans to the adult entertainment worker prior to her/his arrival to St. Maarten, with the aim to develop financial dependency which will make her/him vulnerable to perform work that he/she doesn’t want to do.

• The adult entertainment workers are liable for, in so far as applicable the payment of Social Premiums & Wage Tax;

• The adult entertainment worker cannot and shall not be forced to perform sexual acts against their own free will;

• The adult entertainment workers have the right to terminate their agreement with the brothel/strip club owner at any time and must be free to leave the establishment at their own free will;

• The adult entertainment workers must remain in the possession of their passport and other personal identification and travel document during their stay.

“All of this is aimed towards protecting the human rights of all individuals that are coming to our island, as well as to regulating the industry in a way that is mutually beneficial to all stakeholders” said Minister Lee.

The Minister of Public Health, Social Development, and Labor Emil Lee, would like to bring to the attention of the public, that there is a growing informal sex industry outside of the clubs, where women in nightclubs and bars are offering their services outside of the club environment.

“From a health perspective this is concerning, as it is an unregulated market. This means that these women have probably not undergone any health inspections that are mandatory in the adult entertaining industries” mentioned Minister Lee.

In addition, the lack of security protocols can create a safety risk for both the person offering the services, as well as the client.

“I caution everyone to be careful with this unregulated industry that seems to be developing outside the clubs” said Minister Lee.

July 28, 2021
0
PHILIPSBURG:— On Tuesday, July 27, police arrested two people in connection with abuse and threats. • A woman with the initials M.F.D. was arrested...