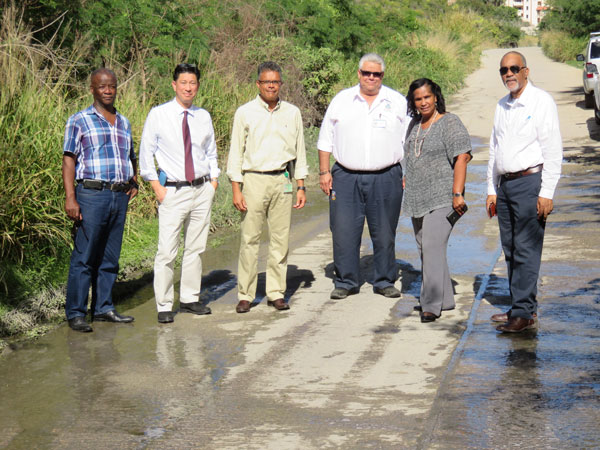 PHILIPSBURG:— “Normally I don’t respond to melee or nonsense, but the release from MP de Weever warranted a response. As part of open government, multiple people know what’s happening and obviously MP de Weever still has his contacts within the Ministry. The release of MP de Weever was irresponsible and fear mongering for political gain. Creating an impression that Ministry of Public Health, Scoail Development and Labor (VSA) or its Minister is not “proactive or hands-on” is nonsense. This was damaging not only to me as Minister but mainly the civil servants that work within the Ministry. After two months of being in office I have more confidence in this Ministry and staff than someone who has worked with them for four years. Attempting to pre-empt Wednesday’s press conference was unprofessional and immature. It was also quite evident that de Weever’s press statement was rushed and showed blatant plagiarism from Wikipedia,” stated Minister Lee during his press briefing statement.

Minister Lee also reiterated that since May 2015 the Ministry through the Department of Collective Services (CPS) has been in communication with PAHO in order to set out a plan on how to respond if an epidemic were to affect the Caribbean region. By December 2015, alert was given that Zika was affecting the region. Minister Lee and the respective stakeholders have since been pro-active in taking preventative measures to protect the population and the economy of Sint Maarten on both a short-term and long-term basis.

On Monday, representatives from VSA and VROMI took a field trip to various locations within Dawn Beach/Oyster Bay presumed to be the source of past “mosquito borne” viruses. This location was chosen based on the fact that complaints had already come in from this district and the group was able to identify first hand where potential breeding grounds for mosquitos were. Minister Lee believes “it is essential for all members of the each community/district to come together and identify where in their neighborhood action needs to be taken to reduce the breeding and harboring of mosquitoes. I have driven through all the districts and seen for myself many breeding sites, but the fact is that the majority of these breeding sites are on private land.” Informed members of the various communities are being requested to report any potential breeding areas to Collective Prevention Services (CPS) by Tel: 721- 542-2078 or surveillance@sintmaartengov.org. The Ministry of Public Health will spearhead this campaign with Collective Prevention Services (CPS) being at the forefront. This department with its vector control officers will be the one to validate all reports that come in and draft the relevant action plans for the districts. Once this is completed, assistance from Ministry VROMI will also be enlisted.

Areas which are of high priority to report are locations where storm water and sewage water is stagnating, abandoned houses with empty pools, garbage piles, abandoned tires in addition to any spot where water can collect. The ae. Aegypti mosquito is considered to be a container breeder due to the females preference to lay eggs in containers of stagnant water. When calling please have all the relevant information handy such as; address, contact information of sender and owner (if known) and what the nature of the problem is. If possible, please email a picture as well.

While there is no cure for the ZIKA virus but it can be prevented. It is for this reasons that CPS has already launched a communication awareness campaign on how to safeguard your surroundings to ensure that you have eliminated potential breeding places and awareness of the symptoms associated with the ZIKA virus. The best methods of personal protection are to apply insect repellent and/or to wear long sleeves and long pants.

On-site fogging with hand held foggers will be used based on reports of high priority areas where the Zika, chikungunya and dengue cases are suspected. Fogging is known to be the least effective tool to combat the war against mosquitos as it is highly costly not to mention mosquitos become immune to the chemical that are being used. If you want to have an impact you have to switch chemicals on a continuous basis, therefore the most important tool is awareness, protection, support from the community and compliance.

Minister Lee has also began looking into prevention measures of lethal ovitraps designed specifically to target the ae. Aegypti mosquito, which are claimed to have eliminated dengue in certain regions. This prevention measure has proven to be more effective than fogging. He has already ordered samples of lethal ovitraps to begin to test their effectiveness. MP de Weever is attempting to highjack a serious Public Health issue for political gain prior to publication creating a false sense of panic for political purposes. Certainly this issue has the concern of the entire Ministry of VSA including its Minister. Playing on the emotions of the people and instilling fear that nothing is being done is not something members of Parliament should spend their time engaging in. Minister Lee stated that he is not amused by such antics from people who should place the interests of the community above politics.