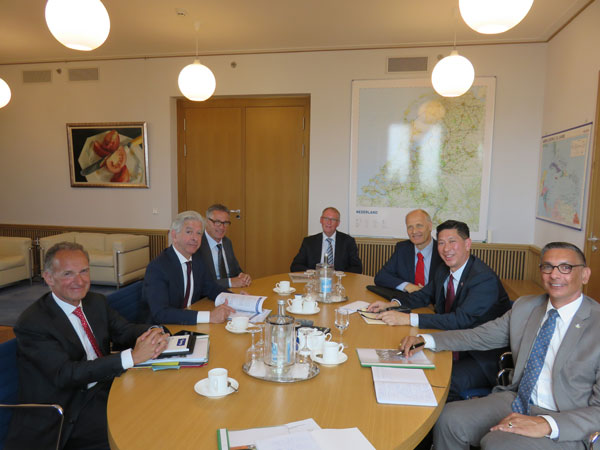 Previously, Minister Plasterk had expressed a willingness to consider offering technical assistance and possible financing for a new hospital based on a solid business plan that has the approval of the Committee for financial supervision (CFT). The delegation met Minister Plasterk to update on the status of the new hospital project as the time is quickly approaching in order to make final plans.

During the meeting Minister Lee presented the updated business plan for the new hospital to Minister Plasterk. Minister Lee also commented on the inclusive, open and transparent developmental process for what will be the new Sint Maarten General Hospital. Minister Lee explained that the process of planning the new hospital has been a very inclusive approach that included feedback from many different stakeholders and experts. The plans for the hospital are practical and based on the needs of the population.

In 2015 a tripartite committee was formed between the Ministry of VSA, The SZV and the SMMC in order to develop sound planning for a new hospital to be realized. “It has become the tripartite committee’s objective that this process will guarantee the integrity of a new hospital regardless of any political changes that may take place. The people of St Maarten need a new hospital that brings affordable, quality and accessible healthcare close to home. Quality Healthcare should not be victimized by politics.” commented Minister Lee.

Minister Lee said “I found the meeting with Minister Plasterk to be extremely open and productive. It is my sincere hope that the new hospital project can serve as a model for improved communications and cooperation between the Netherlands and St Maarten. As health care costs globally increase, synchronized cooperation between kingdom partners is logical. A new hospital will also benefit the residents of Saba and Statia and by default should help the Netherlands to better manage healthcare costs for the BES islands. This would be a win-win partnership.”

Estimates are that possible financing through the Netherlands because of the low interest rates and longer-term would translate into a savings of operational costs of NAF 6 million per year over the first ten years, which ultimately translates into a better range and quality of services available locally. The increased capacity in health care locally available would diversify our local economy and create many high paying jobs.
Minister of Interior and Kingdom Relations, Ronald Plasterk said that “It’s a good thing that St.Maarten is improving its health care. The plan for the new hospital underlines this effort.”

In addition, the delegation inquired into the possibility of technical assistance to help the Ministry of VSA with items related to health care reform. “We must always take care of present needs, while keeping a clear eye on what future developments will be needed down the road,” concluded Minister Lee.

J.J. and S.T. bask in their winnings with Lucky Pick, Pick 4 and the Caribbean Lottery. | SMN NEWS

July 23, 2021
0
PHILIPSBURG:— Independent Member of Parliament Christophe Emmanuel on Thursday asked the Integrity Chamber to provide its opinion on whether the awarding of the reconstruction...