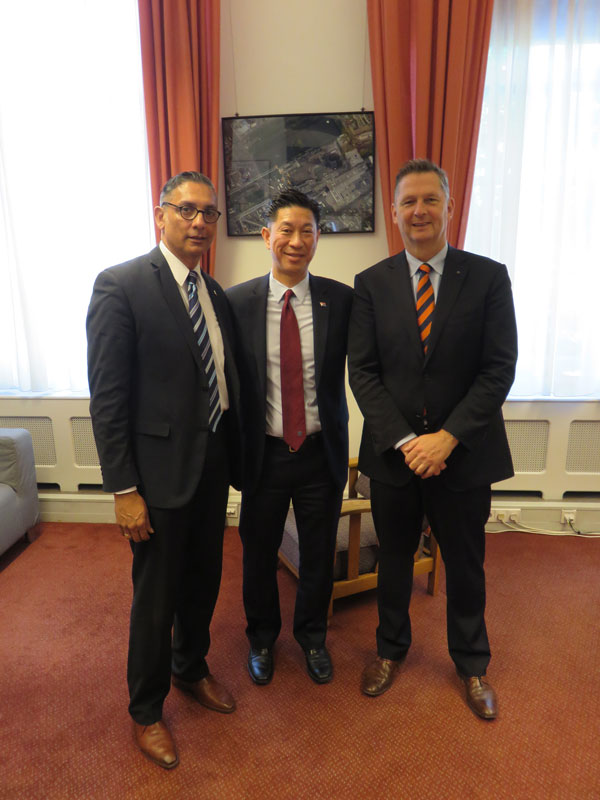 Netherlands/ PHILIPSBURG:— As part of his working visit to the Netherlands, Minister Lee paid a courtesy visit to the Chairman of the permanent committee Kingdom Relations of Parliament, Mr. Jeroen Recourt. Minister Lee also met separately with a member of this committee, MP Andre Bosman.
“As we investigate opportunities for possible cooperation on Health care between different countries within members of the kingdom, I felt it would be helpful to visit members of the second chamber (Parliament) to brief them on our discussions, vision and plans. Ultimately we share many common objectives, in particular in times when resources are limited. “How do we control ever increasing costs of health care while ensuring the best quality of care possible.” said Minister Lee.
Minister Lee also mentioned, “Conversation with MP Recourt (PvdA) and MP Bosman (VVD) were open and very positive. It was an excellent opportunity to update the MP’s on the plan of approach to possible cooperation on bringing affordable quality healthcare to the people of Sint Maarten, and by default for Saba and St. Eustatius as well. It is my sincere hope that the very open and transparent approach to the new hospital and Health care combined with improved communication between Kingdom partners can pave the way for improved relations and cooperation.”
The meetings furthermore proved their value because they caused the Sint Maarten delegation to obtain first hand points of view from Parliament where the transparent disclosure by Minister Lee of the plans are concerned.
The dynamics of the meetings were positive and very constructive. In a bi-lateral meeting on the floor of the second chamber later that day between the Director of the Cabinet of the Minister Plenipotentiary, Mr. Perry Geerlings and critical parliamentarian Mr. Ronald van Raak (SP), Mr. van Raak expressed positive sentiments for the plans of Minister Lee. He found the approach and plans to be very professional and transparent while he expressed the necessity for parties involved to make use of the win-win opportunity the plans for a new hospital offers to both Sint Maarten and our sister-islands Saba and St. Eustatius (BES).
In this context MP van Raak emphasized on the enormous costs for the Netherlands, related to off-island care of patients.
“If there is an opportunity to provide for specialist help for our patients closer to home, it would be puzzling if one would not further research the win-win opportunity given”. In closing, Mr. van Raak is looking forward to be further informed through the Chairman of the Parliament Committee for Kingdom Relations.
“Overall a most worthy work-visit by minister Lee! A visit well received by the counter parts in The Hague, a visit which definitely created awareness in The Hague of the necessity for a more productive and sustainable work-relationship between Kingdom partners”, said the Director of the Cabinet of the Ministry of Plenipotentiary , Mr. Perry Geerlings.