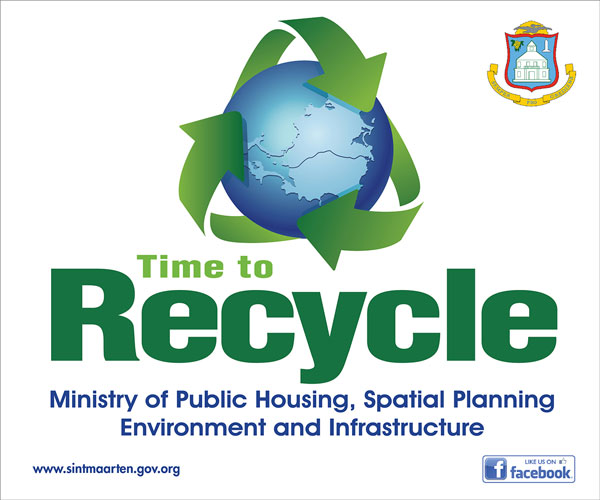 PHILIPSBURG:— Minister of VROMI, Angel Meyers has commenced a pilot project where recycling bins are placed in various government establishments with the goal of promoting recycling and also encouraging the general public to start thinking on and practicing recycling.

Minister of VROMI, Angel Meyers has chosen to begin the recycling project by first leading by example. Recycling bins will be placed in the new Government Building, the Receivers office, the Civil Registry, Facility services, Labor Department, and the Ministry of VROMI. Bins will also be placed at the Sister Magda primary school and the University of St. Martin.

Bins and a promotional banner will be placed in these establishments which will also be accessible to the general public. The bins will be separated in glass, plastic bottles/cans and paper.

An informational recycle hour was held on Wednesday October 26, 2017 for employees of the participating departments regarding the pilot project. Presenters for the evening was Head of Facility Services Mr. Rignald “Rick” Martina who will oversee the pilot project, Mr. Roberto Arrindell, Representative of Confident construction BV St. Maarten who is in charge of the pickup of the recyclables and Honorable Minister Angel Meyers. The pilot project will be for a duration of 3 months and then will later be evaluated in order to proceed effectively.

The Government of Sint Maarten recycling pilot project is scheduled to begin the end of November.