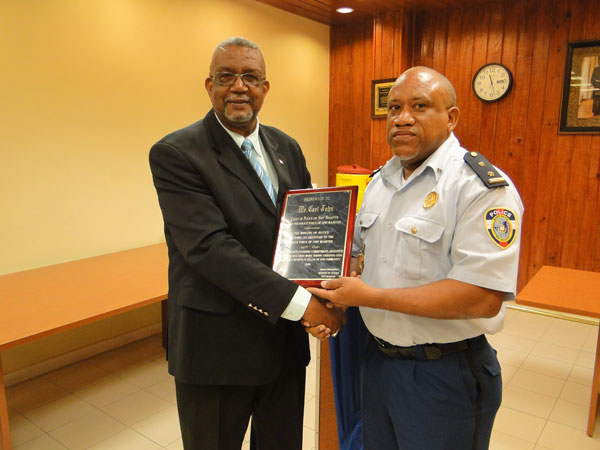 PHILIPSBURG:— On Monday May 23rd 2016 at approximately 11.00 a.m. the Minister of Justice visited the Philipsburg Police Head quarters where he extended sincere words of gratitude to the entire KPSM in particular all the police officers who have worked tirelessly and made sacrifices to ensure to safety of the community of Sint Maarten and the visitors to the island during Carnival 2016. The minister congratulated the officers and informed them that without their tremendous input and sacrifice this would not have been possible. The minister stated that as part of his gratitude to the officers, which he is permitted by law, granted each officer two extra vacation days which they can enjoy before the end of 2016.
In the presence of the officers who attended the ceremony, members of the Prosecutors Office and members of his cabinet, the Minister of Justice then presented the Police Chief Carl John with a plaque, as a token of appreciation, for all members of the KPSM for a “job well done” which reads: “Chief of Police of Sint Maarten and the police force of Sint Maarten. The Ministry of Justice extends its gratitude to the police force of Sint Maarten for their outstanding commitment, devotion, dedication and hard work during carnival 2016. You are an important pillar of our community”. Signed: Edson Kirindongo, Minister of Justice Sint Maarten.