Home Local News Minister of Tourism Arrindell listens to concerns of IMA and informs about... 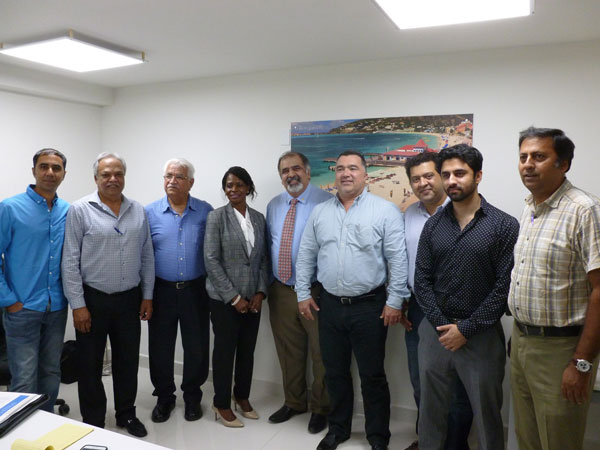 GREAT BAY(DCOMM):—  Minister of Tourism, Economic Affairs, Transportation and Telecommunications (Ministry TEATT) Ingrid Arrindell, attended a meeting with the Board of the Indian Merchants Association (IMA) on Monday evening upon the invitation of the representatives of the business group.

Some of the issues brought forward by the IMA are the traffic situation in the country, which is adversely impacting the willingness of our stay-over visitors to drive to Philipsburg for shopping; the lack of parking in Philipsburg; the decrease in cruise-passenger spending; security; extended business opening hours; barker harassment; the challenges of doing business due to the various banking fees and government taxes; fast ferry service for travel and trade in addition to affordable airlift; and the marketing of the destination.

Minister Arrindell informed the IMA board that since she took office a short eight months ago, a number of initiatives have been undertaken which are moving along in the pipeline, while a number of others will be implemented and executed within the coming months.

The Minister added that given both the financial and time constraints, the focus has had to be placed on priorities such as the repairs to Front Street, the establishment of the St. Maarten Tourism Authority (STA), the joint marketing campaign which includes support from the St. Maarten Hospitality and Trade Association (SHTA), TripAdvisor, and Expedia, which promotes the destination to potential visitors to visit the destination during the slow season; the approval of funds for a camera project in Philipsburg for increased security and safety; the pilot project wherein cruise vessels will be allowed to stay overnight in an attempt to revive the nightlife in Philipsburg; increasing of airlift to the destination, and the increase in the calendar of special-events for the entire year that would increase the number of visitors coming to the island.

Other initiatives include cruise vessel homeporting which will cater to the high-end market; the beautification of Front and Back Street, the Sucker Garden Tourist Corridor – a project of Naf.9 million which will include additional lighting, repairs to the brick-road, wheelchair accessibility, and the replacing of trees; beautification of the Simpson Bay sidewalks ; the extension of the Boardwalk from the Walter Plantz Square to Fort Amsterdam; a passenger trolley system for Front Street and Back Street; and the setting up of a specially trained Tourist Police-Unit to patrol tourists areas throughout the country.

The Minister thanked the IMA for their invitation and the opportunity to hear their concerns regarding the issues that are affecting them. At the same time she was able to let the Board know that the Ministry of TEATT is open to suggestions and that she is here to facilitate, to assist them in finding solutions and navigating the bureaucratic procedural processes of government in order to get expedite those things that will get our economy moving and growing.

“The discussion was open and constructive. Many ideas were exchanged, and I informed IMA that they should continue to bring their concerns (and their proposals for corrective action) to Government. They should also actively participate and assist in the destination marketing initiatives and programs.

“I also welcomed the proposal from IMA President Damu Rawtani to have regular consultation. Communication is vital in order to jointly address concerns that will contribute to moving our country forward and growing our economy,” Minister of Tourism and Economic Affairs Ingrid Arrindell said on Wednesday.