Home Local News Minister of VROMI to issue fines to the haulers that were issued... 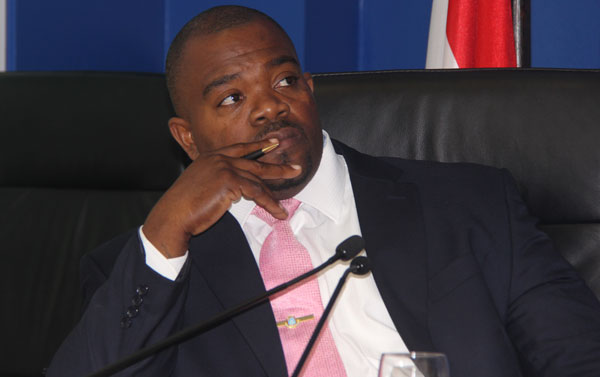 Residents urged to take pride as they too will be fined if caught littering on purpose.

PHILIPSBURG:— Minister of VROMI Christopher Emmanuel announced at the Council of Minister’s press briefing on Wednesday that he has taken the decision to issue fines to at least two of the garbage collectors.

He said each hauler will be fined NAF.3.500.00 for not carrying out their duties as outlined in the contracts. Minister Emmanuel said the department of VROMI have been meeting with the haulers and those that were given contracts for the roadside cleaning in order for them to find solutions. He said on Christmas Eve he received a message from the Prime Minister who basically told him that something must be done with the collection of garbage in the various districts because the garbage situation is no longer acceptable. Emmanuel said even though it was Christmas Eve and a bit late he managed to get some workers together who have decided to start cleaning up several areas where garbage piled up for days.

The Minister further explained that residents have been dumping their household (large items) garbage and even cutting trees and dumping it alongside the road which is also unacceptable. He said right now the department of VROMI is busy revising the garbage collection contracts in order to separate the collection of household garbage from bulk garbage.

Emmanuel further explained that he drove around the island and in various areas he saw that large household items are dumped at any time. He gave an example of old mattresses, fridges, stoves, air conditioners and trees were dumped alongside the roads sometimes just after the garbage were picked up. Emmanuel called on the residents of St. Maarten to have some pride in keeping their surroundings clean, he said that persons that have large household items could use their own vehicles and take those things to the landfill and not dump them alongside the roads. The same thing he stated about trees that were cut and placed alongside the roads.

The Minister said that during the past days he personally spoke to some residents who admitted that they had dumped the limbs and branches from trees on the side of the road and he made it clear that should not happen again and more so informed them that in order to cut down a tree they would need to obtain a permit because some of the trees on some people properties are 200 or more years old and as such they are considered to monuments.

SMN News learned that the Minister even took measures to have another hauler assist parcel 5 and 6 that were contracted to Roberto and Sons.

Prime Minister William Marlin commended the Minister of VROMI for the actions he took on Christmas Eve after he received his message. The Prime Minister said the young Minister took it upon himself to assist with the clean up on Christmas Day in order to bring about some cleanliness.

Marlin also called on residents to take pride, he said he would see the haulers picking up garbage and shortly after the residents would throw out large household items and even carpentry materials such as old cupboards.

SMN News contacted the contractors for parcel 5 and 6 who said that already met with the Minister to discuss several things, one being having another hauler to come in and assist them because the situation with the garbage is not getting better. The contractor said that they had sent letters to the former Minister asking for meetings to discuss the situation but the former Minister never sat with them. He commended the current Minister of VROMI who met with them the moment he took office and both parties expressed their concerns.

Source: St. Martin News Network
Minister of VROMI to issue fines to the haulers that were issued contracts for the collection of garbage.