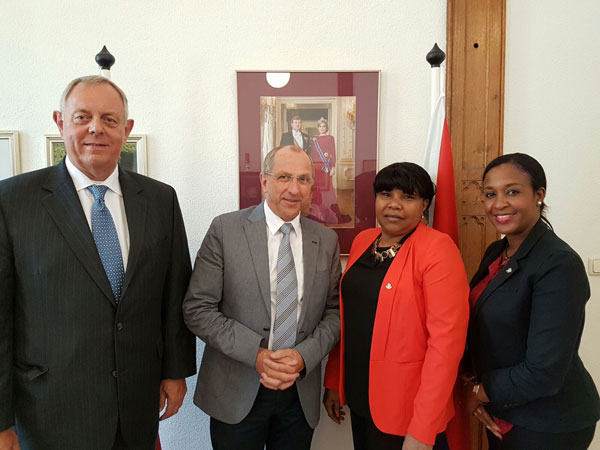 PHILIPSBURG:—- Minister Plenipotentiary Henrietta Doran-York, although very pleased with the quantity of Security officers that are in the public as well as the private sector throughout Sint Maarten, is also of the opinion that it is widely noticeable that the quality of many of these officers, is way below par.

It is therefore that on Tuesday July 26th, 2016, the Minister Doran-York met with Mr. H. Neddermeijer, who is the Director of the Security training Academy of Scientia, and Mr. R. Meelis, General Director, the Executives of the Scientia N.V., which is an Institute for the Training and Education in Safety, Security, Integrity and Management.

Minister Doran-York, who has a background of about 3 decades in the justice and security field, and is very passionate about security on the Sint Maarten, is seeking ways to enhance the level of security, both on the Public as well as the Private level on the Island.

Source: St. Martin News Network
Minister Plenipotentiary, Henrietta Doran York wants to see the bar raised as far as it pertains to Security in general on Sint Maarten. Meets with Scientia security group on The Hague.