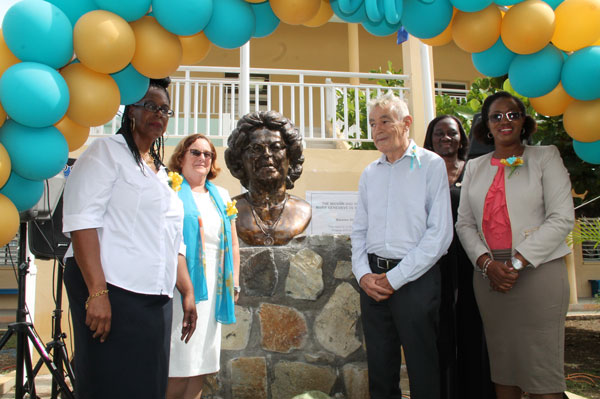 Hope Estate:— On Thursday, November 3rd, the Minister of Education, Silveria Jacobs, attended the unveiling ceremony of the bust for the late teacher Marie Genevieve de Weever which was organized by the management of the school, Mrs. Anna Grantham-Halley, Mrs. Sandra Mathew and the committee of dedicated staff members. The ceremony was hosted by Teacher Altagracia Hawley.

Minister Jacobs congratulated the current school staff and all others whom, over time, helped in the development of the institution, including teachers, administrators, and auxiliary workers. The Minister gave words of encouragement to the teachers and school staff to continue the hard work, as she was very proud to hear about and to have seen the development of the school.

The formal historical recollection was informative, but it was the words of the former School Manager and first Principal of the school, Mrs. Doncker-Rogers which evoked very strong emotions for all who had gone through the experience as well those hearing the story for the very first time. It was a testament to the resilience, discipline, sacrifice and dedication of educators who put the education of our youth above self. Current teachers were encouraged to be like Teacher Jenny who dedicated her life to helping others over and above the call of duty.
Mrs. Doncker-Rogers, Mrs. Moeslikan-Carter, and Mrs. Bourne-Gumbs were honored as former management of the Marie Genevieve de Weever School with a plaque. The son of late Teacher Jenny de Weever also received a plaque and shared a few words of gratitude on behalf of his mom.

Minister Jacobs gave her heartfelt well wishes to the students and staff of the Marie Genevieve de Weever School. “I wish the Marie Genevieve de Weever primary school continued success as you grow into and bloom as the flowers of Sint Maarten as you go forward. Nelson Mandela once said ‘Education is the most powerful tool with which to change the world’ and I believe that the teachers, principals, management and staff of the Genevieve de Weever, from inception, have been doing that and will continue to do so and make a valiant effort to make a change right here on Sint Maarten,” the Minister added.

Minister of Education Silveria Jacobs, together with the school’s management unveiled the bust of the late teacher Marie Genevieve de Weever.