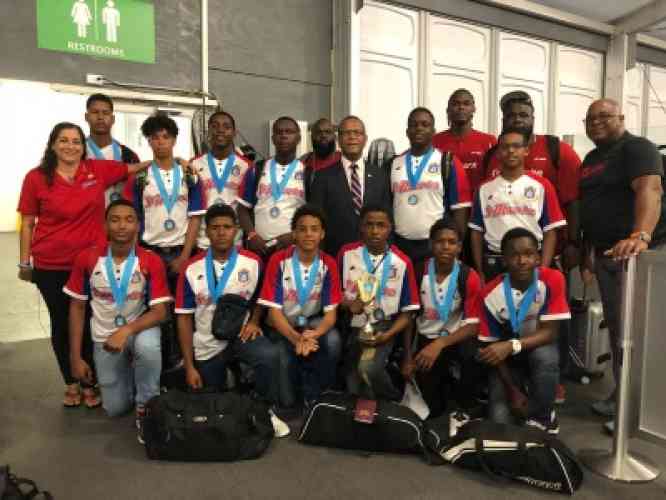 PHILIPSBURG:— The St. Maarten 16 and under Baseball Team returned home as Champions from the Royal Kingdom Games in Aruba to an honorary welcome by the Minister of Education, Culture, Youth, and Sport, the Honourable Wycliffe Smith on Saturday afternoon. As the coaches, management, and players exited the Conviasa aircraft, Minister Smith congratulated each person on a job well done. The team won their first three games against the Netherlands, Bonaire, and Curacao before rainy conditions caused the final game against Aruba to be canceled.
The twelve-player team comprised of Darlinson Tavarez Diaz, Julian Peterson, Mark Perez Figuereo, Yensi Morales, Roiny Telemaco Marte, Miguel Marryshaw Herrera, Freesje Hughes, Jhondel Peralta, Isael Vasquez Contreras, Mawali King, Eldon Morgan and captain, Anderson James. Led by the President/Founder of the Sint Maarten Baseball Academy Foundation and national coach, Anthony Rombley, the team was accompanied by team manager, Yamal Thomas, their coaches René Leveret and Edmund Williams, as well as the Secretary of the foundation, Agnes de Polo.
In the annual tournament hosted by the Ministry of Justice of the Netherlands, Sint Maarten scored 15-0 against the Netherlands, 14-0 against Bonaire, and 3-1 against Curacao. When the final game against host, Aruba, was canceled due to the field becoming too wet for play, the organizers for the games assessed Sint Maarten as the team with the leading scores, most disciplined and over-all top performance. As a result, the Sint Maarten Baseball Team was awarded the 2018 trophy for the Kingdom Games.
According to Minister Smith, “We are proud of our athletes and how well this team represented Sint Maarten in Aruba. Our youth are exceptional, and with the right support, there is no limit on what they can accomplish. We must encourage them, their coaches and the organizations that are dedicated to improving sports on our island because Sports matter.”
The Sint Maarten Baseball Academy engages youth from the different elementary and high schools, regardless of their experience with the sport. The Academy aims to train and develop the recruits into top players who are capable of representing Sint Maarten on the regional and international level. Another recruitment drive will be conducted shortly.

May 11, 2021
0
PHILIPSBURG:— The Committee of Constitutional Affairs and Decolonization (CCAD) will meet on May 12, 2021. The Committee meeting which was adjourned on April 15, 2021, will be reconvened on Wednesday at 14.00 hrs. in the General Assembly Chamber of...
Read more

May 11, 2021
0
PHILIPSBURG (DCOMM):— The application process for the annual Hurricane Passes for the 2021 Atlantic Hurricane Season which starts June 1 and runs through November...

May 11, 2021
0
PHILIPSBURG (DCOMM):— The application process for the annual Hurricane Passes for the 2021 Atlantic Hurricane Season which starts June 1 and runs through November...

May 11, 2021
0
PHILIPSBURG:— Independent MP Christophe Emmanuel said that it is his opinion that the board of SMMC outright lied to the Minister of VSA Omar...

SMMC Supervisory Board notifies Minister VSA, that “The Australian doctor,” is...