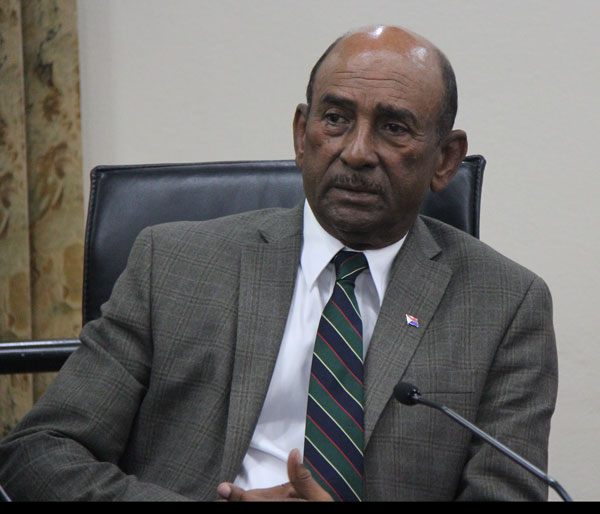 PHILIPSBURG:— Minister of Finance Richard Gibson Sr. announced on Wednesday Council of Ministers press briefing that there are indications that Moody’s will downgrade St. Maarten’s ratings to BAA2. St. Maarten was rated as BAA1.
Moodys’ ratings are important for investors that have intention to invest in any country and as such they would look-up the ratings of that country on Moodys’.
Minister Gibson said that the growth of the country has been 0.5 for several years and the outlook for the future based on global affairs that would not change significantly in the near future. The Minister said the projection for 2016 will be either 0.3% or 0.5%. He termed the new developments as significant based on the economic development of the other Caribbean islands. The Minister of Finance felt that there is something St. Maarten is not doing that they would need to do now in order to change the current trend, if not then the trend will continue and the St Maarten’s rating will continue to downwards. Gibson said that something has to be done with the financial institutions since there too things have not been going in the right direction. He said that these institutions have to be improved in order to meet Moodys’ requirements. “St. Maarten needs to make changes and improve the country’s performance in order to meet the benchmarks that are required.”
Minister Gibson said that St. Maarten has to make changes and changes are not easy but necessary. Minister Gibson said that in 2018 the CFT will terminate their services to St. Maarten and if that happens then St. Maarten will have to borrow on the national market at 6 to 7%. Currently St. Maarten is able to borrow at a 2% to 2.5% due to the fact that the country is still under the Kingdom with the CFT’s involvement.