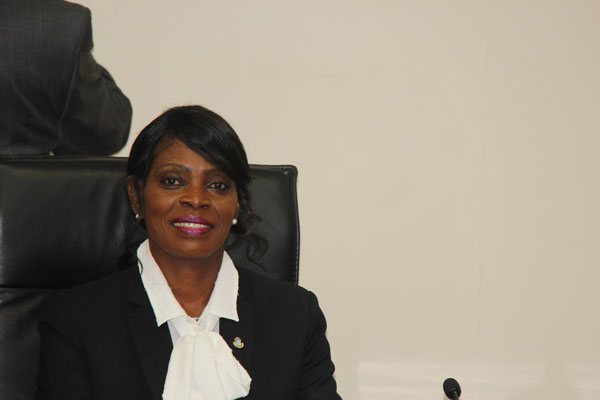 PHILIPSBURG:— Minister of TEATT Ingrid Arrindell announced on Wednesday that she has placed a moratorium on taxi and bus licenses since she need to take stock on how many taxis and buses are legally operating on the Dutch side of the island. Minister Arrindell said some 384 requests for taxi licenses have been declined.
The Minister said that her ministry is busy working on gathering information as to how many car rentals are operating on St. Maarten legally, she said that there are number of rentals with French number plates operating on the Dutch side and those companies are not paying their dues to government. She said she will soon be meeting with the department to obtain figures on the amount of legal car rentals on the island. Minister Arrindell said while her ministry is working on regulating and implementing the transportation policy, one of the areas they will modify is the amount of fees that has to be charged to the various transportation companies on the island. “When one look outside you will see more bus and taxis more that people living on the island, so something has to be done in order to rectify the problem while getting those persons that have these licenses to pay their dues.
The Minister said while the country is cash strapped and monies are badly needed several business licenses that were requested while the former government was in office were not signed off by the former Minister. She said the economy of St. Maarten has declined from 2014 in 2015 and her goal is to do everything possible to generate more monies for government, one being implementing casino entrance fees, ensure that the companies operating on the Dutch side pay their dues and are registered.
The Minister who is charged with the island’s economy also announced that she is busy marketing the island worldwide in order to revamp and boost the economy while promoting small businesses on the island.