Home Local News Movie about Derek Walcott to have a St. Martin premiere. 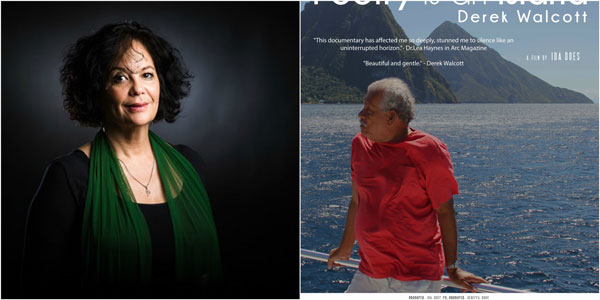 GREAT BAY:— How can the life of a writer, his or her books, and other facets of his or her life be made into an exciting movie? Surinamese film director Ida Does has already answered that question.
Poetry is an island is a feature film about the life and work of the Nobel Laureate poet Derek Alton Walcott, said Does about the latest documentary that she has directed and produced.
The free screening of the award-winning film will take place at the Philipsburg Jubilee Library on Monday, May 30, at 6:30 PM, said library director Monique Alberts.
Derek Walcott, who has read his exceptional poems in St. Martin on at least two occasions, “is one of the most prominent and most celebrated English-language poets in the world,” said Does. The 80-minutes long documentary is entirely in English.
As part of the presentation at the library Does will take questions from the audience and discuss her experiences with making the film and showing it at international film festivals.
I agree that the documentary will take movie lovers “on a mesmerizing journey to meet the man behind the poetry,” said Jacqueline Sample, president of House of Nehesi Publishers (HNP). The publisher was contacted a few months ago by Alberts to work with the library in bringing the film to St. Martin, where Walcott reportedly has family roots.
Does said that as the film shows the writer in his home in St. Lucia, “we get to witness some of the poetic mystery that surrounds Walcott. By seeing Walcott in his different roles as poet, playwright, and visual artist, as well as through various interviews with friends, family, and Walcott himself, we learn how a small Caribbean island gave rise to one of the greatest poets of our time.”
Poetry is an island also features Sigrid Nama, Natalie La Porte, Sir Dunstan St. Omer, Arthur Jacobs, Peter Walcott, Michelle Serieux, noted people in the life of the great poet. The film is co-produced by Rebecca Roos (walcottfilm.com).
Jubilee Library is presenting the St. Martin screening of Poetry is an island in collaboration with the St. Martin Book Fair, said Alberts. The library also obtained a Prince Bernhard Fund grant to help organize the pre-book fair program.
Conscious Lyrics Foundation and House of Nehesi Publishers are organizing the the St. Martin Book Fair, June 2 – 4, 2016 — in collaboration with the St. Maarten Tourist Bureau, University of St. Martin, LC Fleming Foundation, GEBE, and the Collectivity of St. Martin.
The Book Fair Committee is also very thankful that Philipsburg Jubilee Library, IrieLife, and Peridot Foundation are contributing to literary, movie, and other cultural presentations of the 14th edition of the St. Martin Book Fair, said Book Fair coordinator Shujah Reiph.