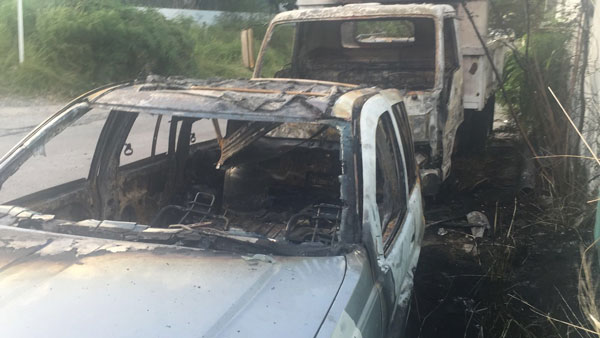 ST. PETERS:— The vehicle that was blown up in South Reward on Tuesday afternoon belongs to MP Christopher Emmanuel. According to information SMN News received, the culprits placed a cooking gas cylinder on the back seat of the vehicle and apparently punched holes in the cylinder, the culprits also had a gun inside the vehicle that were not be used at the time. At least two persons are involved in this attack.
Based on unconfirmed reports one of the suspects was arrested, but was released shortly after.  So far police remains tightlipped on the destruction of the MPs vehicle and the gun that was found inside. SMN News learnt that when police went to the scene the first time they did not see the firearm because it was almost under the seat of the vehicle and among rubbish. However, neighbors and the MP himself saw some young men was watch police and as soon as the police left one of the rushed inside the vehicle probably to remove the firearm but the MP rushed to his car and ran the young men away, the source said upon research they spotted the firearm inside the vehicle and police was called back to the scene, the neighbors who spoke to SMN News said that during the second visit police did retrieve the firearm and shells from inside the vehicle which they confiscated.  Police spokesman Ricardo Henson said that two vehicles were burnt on Carrot Road South Reward on Tuesday afternoon. He further confirmed that one of the vehicles belong to MP Christopher Emmanuel and indeed a cooking gas bottle was inside of the vehicle. Even though SMN News have photographs showing that there was firearm in the vehicle Henson said his report does not indicate that. He said so far the investigation shows that possible arson was committed. When Asked by SMN News if police arrested a suspect responsible for the possible arson, Henson said that too is not in the report he received from the detectives. Late Wednesday evening SMN News contacted Police Spokesman Ricardo Henson and asked him to verify from the detectives that are investigating the case if they found a fire arm in the vehicle and if someone was arrested but released too soon. Henson said that indeed said after making contact with the detectives that a firearm was indeed found and confiscated, he said that no one was arrested in the case but witnesses were heard. Henson said the police beleives that they will be able to apprehend the suspects that burnt the MP’s car and the other vehicle that was next to it. 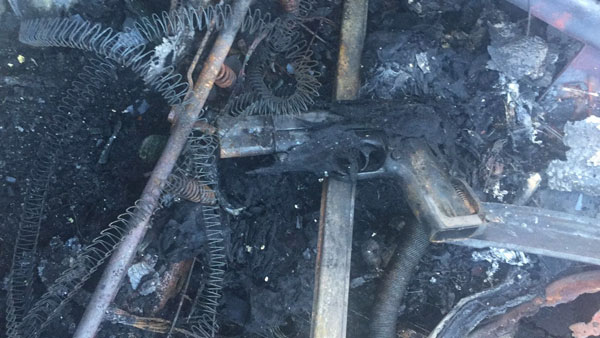 SMN News also asked Prime Minister William Marlin about the incident and what he thinks about such actions. Marlin said that he heard of it from his wife when he went home but up to the time of the press conference he could not reach the Member of Parliament by telephone. He said he does not have any details on the matter but if this incident is linked to the elections or politics and candidates are being targeted then St. Maarten is heading in the wrong direction. He said that he is not someone that will sensationalize anything but instead he would leave the police do their jobs.