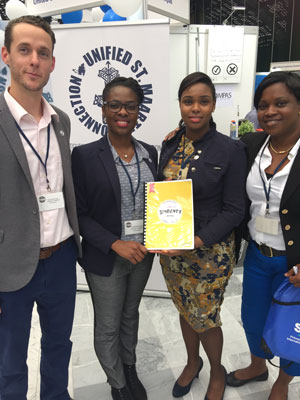 PHILIPSBURG:—  Member of Parliament (MP) Leona Marlin-Romeo amongst many other MP’s attended the FRED EXPO held in the Netherlands.

It is here that the MP met with the Unified St. Maarten Connection (USC) foundation and was fully informed about the objectives and the driving force/motivation behind the organization.

What captured the attention of the Member of Parliament is that USC, a non-profit organization has creatively and strategically found ways to reach out to the students. This clearly depicts that they are competent, functions on a professional level and capable of bridging the gap between students from Sint Maarten living in the Netherlands (vice versa).

From experience Member of Parliament Leona Marlin-Romeo a former mentor and regional coordinator of the SSNA (Stichting Studie Commissie Nederlands Antillen), has often emphasized the need to inform/prepare students for their journey abroad a year or two before graduation.

Doing such in the exam year only places extra pressure on the students. The extra time allows the student to better study and digest the information given, stated the MP.

The USC publishes an annual student manual stated the Member of Parliament that should be endorsed by the Study Financing Department and the community. The manual consists of 67 pages with in-depth information about a multitude of topics related to life in the Netherlands, from applying for DUO to combatting the winter blues.

This should be made readily accessible in Sint Maarten, in print form not only for prospective students but for those students who intend to pursue their education in the Netherlands without receiving a government loan. The latter students are known as “free movers”.

Free movers are often left to venture into the Netherlands on their own with guidance from another student or family member. Having such a manual is of vital importance for a free mover.

USC offers the needed connection between students in the Netherlands and Sint Maarten in the areas of internships and jobs by linking with several companies on the island and in the Netherlands, including PwC, White & Yellow Cross and KPMG, who all sent representatives to the FRED Expo according to Cyriel Pfennings, the financial director of the organization.

Member of Parliament Leona Marlin-Romeo encourages the business community to support the foundation with structural contributions based on their outlined needs.

The Member of Parliament is calling for the Minister of Education to fully recognize the Unified St. Maarten Connection and consider networking and partnering with the foundation to complement the neglected areas left by the closure of S4.

The MP encourages all prospective students and their parents to visit the website of the foundation to familiarize themselves with the organization. www.uscfoundation.com

July 28, 2021
0
PHILIPSBURG:— Over the past 24 months, the Ministry of Public Housing, Spatial Planning, Environment and Infrastructure (VROMI) has obtained several pieces of heavy equipment...

Kick off of football clinic for boys and girls. | SMN NEWS