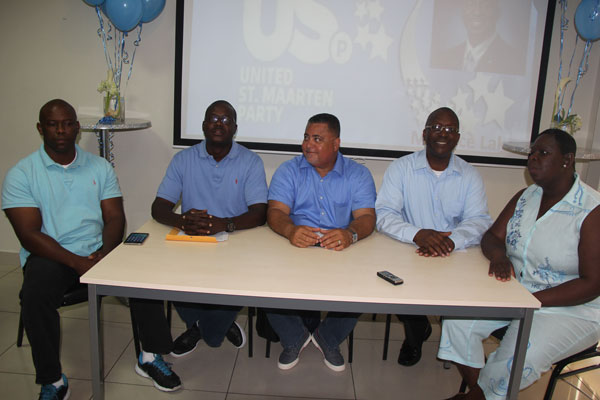 PHILIPSBURG:— Member of Parliament Maurice Lake has put all rumors to rest at a press conference on Sunday when he joined the leader and members of the United People’s Party (USP) and announced that he will be contesting the September 26th elections on the USP slate. At the press conference which was held at the Yogesh building were President of the USP Cecil Nicolas, Paul, Lloyd, leader of USP Frans Richardson, Maurice Lake and Mellissa Doncher.
USP President Cecil Nicolas told reporters that the USP strives to build a more inclusive St. Maarten from its birth, one that would brace and empower people in all levels in society. Nicolas said it has not been easy but they will continue to fight in order to strengthen the party to face any obstacle that they may face.
Leader of USP Frans Richardson in his presentation said that that over the years he has been working with MP Maurice Lake his colleague in Parliament. He said that MP Lake has been consistent and one that constantly says that St. Maarten needs to go back to basics in order to fight for its people. As for the USP he said it’s a party of inclusion and they welcome MP Lake to part of their team, a team with unity and one that believes in the people of St. Maarten.
The USP Leader said that he very proud that MP Lake chose USP in order to continue on the track he started in his young political career. Richardson said being part of the USP will allow the MP to strengthen his career and his belief while accomplishing the things he wants for the people of St. Maarten. He described MP Lake a true son of the soil that fights openly for his people.
Richardson said many is wondering why his party continues with the Ministry of Justice, but it was never about him or the party but instead about serving St. Maarten. He said that the Minister of Justice have been working rigorously in fixing a lot especially when it comes to benefits for workers of the Justice Ministry. He said within short the Minister of Justice will unveil the camera project they are working on and they also intend to finalize the purchase of the Soremar building in Cole bay that will house the shooting range for the Ministry of Justice.
Asked if MP Silvio Matser will be joining the USP to contest the upcoming elections Leader of USP said that it is the intention to have MP Matser on the USP slate but in due time the MP will come forward to make his announcement. He acknowledged that MP Matser has some legal issues to deal with but he is sure all of that will be taken care of.
MP Maurice Lake and the incoming member of UPS said that he will contesting the elections with USP. He expressed gratitude to the leader of USP Frans Richardson. He said prior to him leaving the UPP he discussed with MP Richardson and he made clear to him that he will not move unless he is assured that the current coalition is serious in working for the people of St. Maarten and not enriching themselves. He said he placed his trust and confidence in Richardson back then and since the current coalition is in office they have been putting the people first and the general interest of the community and not their own interest. MP Lake said that the one of the main things the people of St. Maarten wants is a piece of land in order to build their own homes.
He called on politicians to raise the bar and putting the people first in order to move the country forward.
Asked if he held the press conference in order to put the rumors to rest, MP Lake said it is indeed so, but also a number of political parties contacted him and he felt it was necessary to make it known to all the other political parties that he already chose a party with which he will be contesting the upcoming elections.

Road closures on Tuesday and Wednesday in connection with the Farewell Ceremony of His Excellency the Governor, drs. E.B. Holiday. | SMN NEWS

October 4, 2022
0
PHILIPSBURG:--- A number of road closures will be in place on Tuesday, October 4, 2022, and Wednesday, October 5, 2022, in connection with the various events surrounding the farewell ceremony of His Excellency the Governor, drs. Eugene B. Holiday....
Read more